During early morning Friday hours in Orange, look up and see Mars right next to the Moon 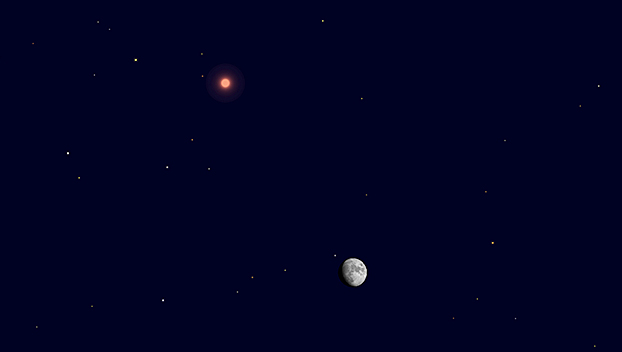 A moon and mars conjunction is pictured. (space.com)

Stargazing is an accessible way to learn about the night sky, even without the use of binoculars or a powerful telescope.

One such opportunity for “naked eye” observing occurs this week thanks to the eastward movement of the planet Mars and the position of the moon.

Amateur Astronomer, president of the Astronomical Society of Southeast Texas and publisher of the YouTube channel Deep Sky Dude explains this astronomical event for the public,

“Just after 4:30 a.m. on Aug. 19, the Moon and Mars will be very close together in the eastern skies,” Will Young said. “When two objects in the sky appear to be close to one another from Earth’s perspective, we call that a conjunction. This one will be pretty good. The Moon and Mars will be about 2 degrees apart, which is fairly close.”

As Young explains, Mars will resemble a bright star.

“If you’ve ever wondered which “star” in the sky is Mars, then this is your morning,” he said. “All you have to do is locate the Moon and you’ll see Mars right next to it. If you have a telescope or binoculars, you should definitely point it in that direction and enjoy the view.”

Danielle Powell, who teaches a new STEAM elective at West Orange-Stark Elementary, said this “exciting astronomical event” is a great learning experience for all ages because it will be seen by the naked eye.

“At our school, through our new STEAM program, all students will be informed of events just like this in our solar system on a weekly basis,” she said. “This will open so many great discussions about what is going on all around us, not just in Orange.”

Another celestial body that is visible to one’s naked eyes is the moon, Earth’s natural satellite.

Observing the moon is a great idea because it always faces Earth, it’s big and bright, and some of its details can be seen without a telescope. And viewing it during its crescent, half or gibbous phases is ideal.

This makes the Aug. 19 conjunction of the Moon and Mars an appropriate opportunity for viewing.

During the conjunction, half of the moon’s surface will be illuminated by the sun giving beginning observers a stark contrast to enjoy.

As daylight approaches, naked eye observation of Mars will become difficult. The best opportunity to view is before daybreak.

The Astronomical Society of Southeast Texas meets at 7 p.m. on the second Friday of each month at the Frank Planetarium in Beaumont. Members are from Orange, Jefferson, Hardin, Jasper and Newton counties.