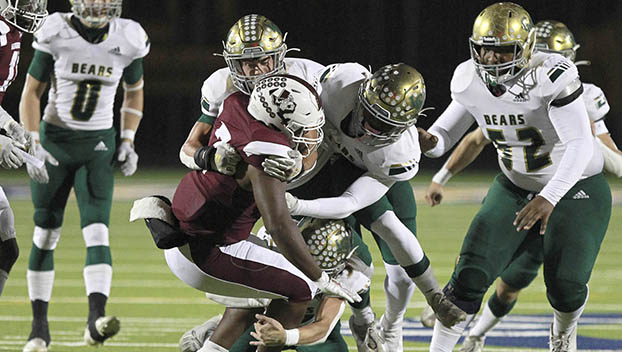 The LC-M defense collides with a West Columbia running back during the playoffs last season. (Mark Pachuca/Orange Leader)

Instead of getting to host their first two games of the season, the Little Cypress-Mauriceville Battlin’ Bears are heading on the road on Thursday nights in their first two battles.

Work on Battlin’ Bear Stadium, which began following the approval by the Little Cypress-Mauriceville Board of Trustees for the installation of artificial turf over the existing football field, will continue into early September.

“Build it, they will come, but the tough thing is it might be that last night in September when we play Spring Legacy for Homecoming. That’s the goal now,” said LC-M Athletic Director and head football coach Eric Peevey. “It’s been a tough deal, because all of the kids, coaches and fans want to play at home. But as we all know, you have to deal with Mother Nature sometimes. It seems like it has rained every day at some point the last couple weeks.

“Just when you see some promise and you gain a little traction, showers come and disrupt it. It’s coming though, patience and perseverance. When all is said and done, it’s going to be wonderful and something to be proud of and cherish.”

Last week the Bears had to move their season opener against Hardin-Jefferson to Thursday/Aug. 25 at 7 p.m. at Beaumont ISD’s Memorial Stadium.

LC-M will now play West Orange-Stark on a neutral field on Thursday/Sept. 1 at 7 p.m. in the Orange Bowl at Bridge City High School.

WO-S did not want to flip to their stadium this year and move it back to LC-M next year because it would have given the Mustangs just four home games in 2023. WO-S did offer LC-M that the Mustangs could host both games and LC-M declined that idea.

Peevey is glad the Bears and Mustangs won’t have to travel far.

“I just want to let everyone know the Bridge City school district is welcoming both of us with open arms,” said Peevey. “Coach (Cody) McGuire and their administrators were happy about lending out their facility and great new field. Their field is tremendous and the same company that is doing ours did theirs, so our fans will get a nice look at how that field plays. Orange County always rises up when you need help. That’s what our area is all about.”

Along with turf, improvements to Battlin’ Bear Stadium includes replacing the existing track, installing a new scoreboard and other renovations as funds allow.

“Of course, we would have loved for our first games of the 2022-2023 season to have taken place in our refurbished facilities,” Superintendent Stacey Brister said.

“It’s just not going to be possible right now, but we know how hard everyone is working. When the improvements are unveiled and our players step onto the field for the first time under those Friday night lights, all the waiting will be worthwhile.”