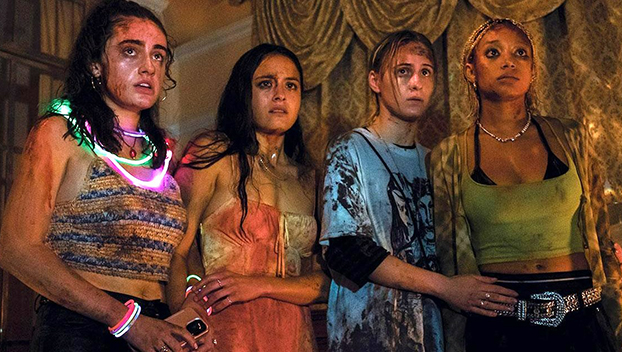 We’re at the point now where I get excited whenever I hear that a movie is being released by A24. This is the distributor behind “Moonlight,” “Minari,” Marcel the Shell with Shoes on” and “Everything Everywhere All at Once.”

To say that they are on a hot streak is a definite understatement.

They have done it again, with the release of “Bodies Bodies Bodies,” a horror film that rises above its genre limitations.

This is basically an Agatha Christie murder-mystery for the Tik Tok generation, where a group of wealthy 20-somethings gather in a mansion for a drug-fueled hurricane party. They are all young and wealthy and without a care in the world.

That is until the storm picks up in intensity, the power goes out and somebody is murdered. Now it’s up to the partygoers to survive the night as they struggle to identify the killer.

It’s not an original concept, but the twist this time comes from the fact the entire cast is comprised of “woke” young adults who are as worried about their social media credibility as they are about that pesky murderer running about the dark mansion.

That gives the film an oddly comic tone — something unusual for a film that could have easily turned into a standard slasher flick.

Credit a witty screenplay that focuses of the characters and their relationships. Sure, it’s hard to forget about the killing, but that doesn’t seem so dire given the shallow, self-obsessed characters who are being killed.

Is it wrong to be happy when an obnoxious movie character is killed?

Perhaps, but I can’t deny that there’s a sadistic level of enjoyment watching this murder spree.

Credit the cast for giving us these annoying-but-still appealing characters. These are actors you may have seen in a prior movie, but for the most part they are newcomers, and this is an effective coming out party.

They prove to be very good at giving us hedonistic characters with lots of secrets, and are mostly charismatic enough to hold our attention, even while you may be secretly cheering for the killer.

The other aspect behind this success is that razor-sharp screenplay by Sarah Delappe. The dialogue is filled with cutting insults hidden under the more socially acceptable banter, giving the film a “Mean Girls” vibe.

The writing is perhaps not as savage as it could have been, but it deserves credit for its rather effective effort.

Of course, “Bodies Bodies Bodies” is ultimately a slasher film, which will turn some audiences off at the get go. These types of films are usually more genre craftsmanship than art, so they are never going to be listed among the year’s best films.

Yet there’s no denying that the filmmakers and the cast deserve credit for making this by-the-numbers movie into something much better than what was expected.

Way to go A24. You’ve got another winner here.