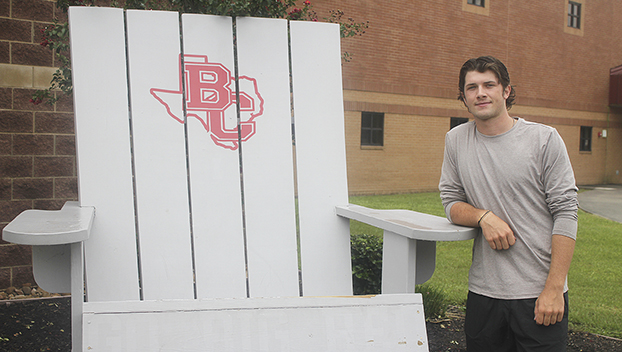 Bridge City senior Grant Hale will always be proud of the big chair he constructed during his sophomore year that sits in front of the high school. Many Bridge City alumni have enjoyed taking selfies in the chair, whether or not they were in the Class of 1971 or 2021. (Van Wade/Orange Leader)

BRIDGE CITY –Bridge City High School has a jack-of-all-trades in senior Grant Hale, and he loves every single second of it.

Hale has spent so much time BCHS, he almost needs a room named after him because he has been involved in so much.

He is the Student Body President this year. He’s stays busy with his Building Trades classes, making nifty items across the high school. He even finds time to play baseball for his construction teacher, Chad Landry.

“I just love being involved with my school and helping out where ever I am needed, whether or not it is organizing things for Student Council or helping redo our teacher’s lounge,” Hale said. “Our STEM Bus project is going along well, and we look forward to completing it this year.”

Principal Tim Woolley says Hale, the son of Amanda and Ryan Hale, is a student that you love representing the school, no matter what he is doing.

Woolley said Hale can influence other students with his voice and leadership and can construct anything.

“He’s not only a leader going into this year, he has been one already for three years,” Woolley said. “He comes from a great family, too. He’s one of the best kids we’ve ever had at this school and we’ve had a lot of good ones.”

Woolley commends his senior’s focus and noted Hale “thought like an adult” even as a freshman.

“But, he has always shown that he is a kid at heart and he has a great heart,” Woolley said. “He’s what you would call a perfect model student.” 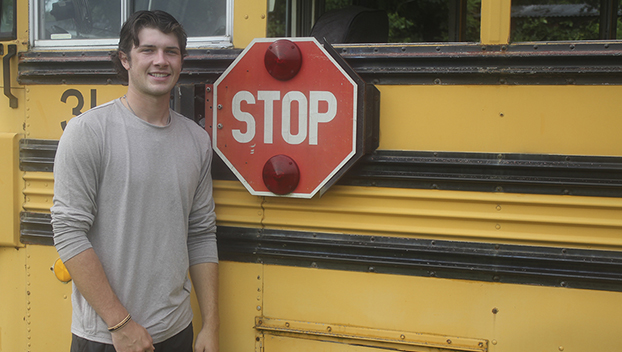 Grant Hale is excited about completing the STEM Bus Project this year. The bus will eventually travel from campus to campus, helping instruct students in subjects in a fun way. (Van Wade/Orange Leader).

Hale was busy as Student Body President Wednesday with the Freshmen Orientation.

That’s always an awesome day, Hale said, because everything is new.

“They are always a little nervous, and as a senior, I just wanted to make them comfortable and tell them that they got this,” according to Hale.

Hale was selected as one of four Junior Counselors named at a Student Council Camp this summer as he was able to showcase his leadership skills.

“That was such a fun camp, and we were able to mingle with so many people. It was a great experience,” said Hale. “There were about 250 campers at SFA University, and we got a lot of great ideas from everybody going into the school year.”

Hale is crafty with his hands, and he played a huge part in refurbishing the teacher’s lounge at the high school with his shop class.

“We really did a great job at that, making new cabinets, painting the whole room, adding cool pictures and bringing in a new TV,” said Hale. “The whole room looks brighter and more inviting, and the teachers are loving it.”

Hale was the main constructor of that extra-large gray chair that sits in front of the high school entrance. So many people, especially Cardinal alumni from many years ago to the present, stop there to take a picture of themselves sitting in the chair.

He finished it when he was a sophomore.

“It’s sturdy and firm for sure, and I can’t tell you how many pictures I’ve seen of people sitting in it,” he said. “That’s right up at the top of fun things I’ve been able to build.”

Hale has been involved in constructing things since he was a little kid, learning so much from his father.

His dad owns Acadian Builders in Bridge City and serves as an inspiration.

“He had me constructing things when I was 10. He’s so hands-on with everything he does and he does amazing work. You learn a lot following him around,” said Hale.

The Bridge City High School “STEM Bus Team” presented a project to the school board last year and it’s certainly a project Hale is proud of.

The students worked for months converting an old school bus into a fully functional STEM classroom/lab on wheels.

Woolley stressed that students have had amazing ideas and created incredible designs to bring this project to life.

“That’s a project we really want to get rolling on,” said Hale. “It’s going to be an educational bus that travels from campus to campus with all kinds of functional things inside the bus so the kids can learn even more in a fun atmosphere. We’re constructing different individual things that will highlight each trip the bus takes. Like, if it goes to the elementary, we might fill it with designs of different shapes on the bus and in the bus that they can learn, or it can go to the junior high and it will be full of science material. We have great ideas for every subject.”

When he’s not being Grant “The Tool Man”, he’ll be trying to hit opposing pitching for the baseball team this spring.

He is looking forward to hanging out with the guys and Coach Landry.

Hale’s goal was to always be a catcher.

“COVID got us our sophomore year,” he said. “Then I tore my labrum after that. I had a great time with my teammates last year, even though I couldn’t play that much, but I was there to root them on. My catching days are over, but I can play a little first base and hit and cheer, just whatever I can do to contribute.”

After he graduates, Hale wants to further his work in building things for the good of all.

He plans to go to Texas A&M to earn a Construction Science degree.

“I’ve learned how to do so much from my Dad and Coach Landry in his Building Trades class, and now I want to go to A&M and absorb some more knowledge. I’m constantly wanting to learn how to build new and different things,” said Hale.