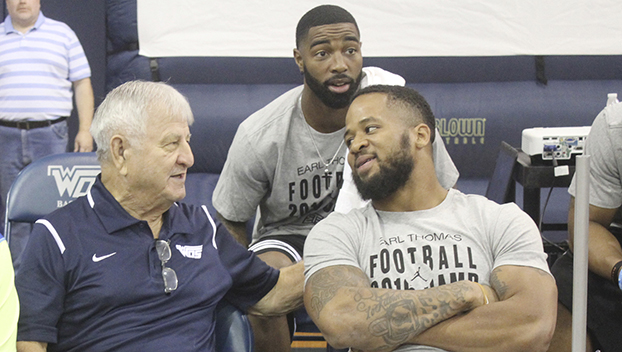 Earl Thomas chats it up with his former West Orange-Stark head coach Dan Hooks at one of his free Earl Thomas Football Camps several years ago. (Van Wade/Orange Leader)

The cause is under investigation, authorities said.

The call came in at approximately 5 p.m. Thursday for a structure fire at the home in the 1600 block of Bear Path Drive.

Smoke and fire was showing through the roof when firefighters arrived. They tried to make an interior attack against the blaze but ended up going into defensive mode.

“The home is a complete loss,” Manshack said.

No one was inside the more-than 5,000 square feet, one-story home at the time of the fire, authorities said.

Manshack said it took approximately two hours to get the fire under control.

Storms had occurred during the day, but Manshack said he does not know if this is related to the fire.

“We will investigate all possibilities,” he said.

The Texas State Fire Marshal’s Office is assisting with the investigation.

No injuries were reported.

The Orange County Fire Department assisted with the fire.

Thomas is a former West Orange-Stark football star and a five-time NFL All Pro.