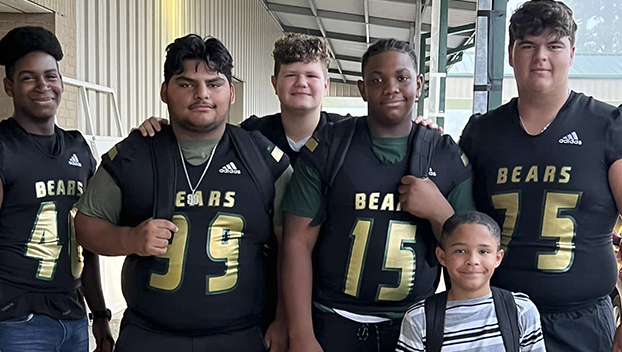 LITTLE CYPRESS – It was a busy first week of full pads for the Little Cypress-Mauriceville Bears.

They even battled the elements of rain and a “mud bowl” of a practice field along the way to get ready for Friday’s scrimmage at Orangefield.

“We’ve got some tough Mauriceville and Little Cypress kids out here, most of them grew up playing in the mud,” said LC-M Athletic Director and head football coach Eric Peevey.

LC-M will be looking for another stout campaign after going 11-3 in Peevey’s first season at the helm last year. The Bears reached the fourth round of the postseason for the first time since 1997.

The Bears are still awaiting their new turf field to be completed and will have their first two original home games start the season at neutral sites, with Hardin-Jefferson and West Orange-Stark. The Bears will face H-J Aug. 25 at 7 p.m. at Beaumont’s Memorial Stadium and will face the Mustangs Sept. 1 at 7 p.m. at Bridge City’s Larry Ward Stadium.

Peevey and the Bears are chomping at the bit to eventually practice on their new turf. There has been a lot of rain in the area, especially in the afternoons, but Peevey is proud at how the Bears are adjusting.

“Actually, our first day this week we went outside, had to go back in and then were able to come back out. Kids are kids, they are fine with it. They have no problem wallowing around in the mud, especially after practice.”

Peevey felt the Bears got after each other pretty good in their Green & Gold scrimmage last weekend.

“The first week of practice was great and all, but it’s always great when you can lace those pads up and get after it,” said Peevey. “The Green & Gold scrimmage really helps us out a lot.

“We saw a lot of positives, and the kids also saw some of their mistakes, and their attitudes about correcting them have been spot-on this week. They know where to improve and they are doing everything we are asking of them.”

The scrimmage with Orangefield gauges a lot of things for the Bears coaching staff.

They are looking to fill some holes left vacant from a great senior class last year.

Scrimmages are definitely a play-and-learn deal.

“We’ll see some good things and some bad things from the scrimmage film but that’s what it is all about at this point,” said Peevey. “That first scrimmage, the kids can learn a lot and by the time the second one arrives, everything should be even smoother. When the players can learn from a mistake, correct it quickly in a game situation, that’s when you know, and it clicks in their heads, ‘We got it.’”

As far as facing the Bobcats and his old high school alma mater?

“Nothing like facing the Slot-T offense when it runs like a well-oiled machine, and Coach (Josh Smalley) and the Bobcats certainly know how to do that,” said Peevey. “Orangefield is always known for being physical, and they line up and get after it. You have to match their physicality.”

The Bears visit Port Neches-Groves in their second scrimmage Aug. 18.