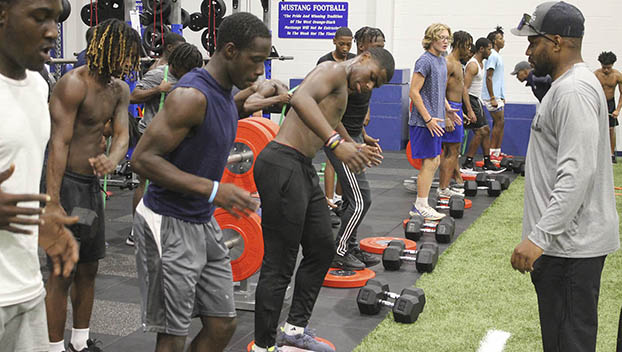 West Orange-Stark assistant coach Ronald Wallace oversees a workout by the Mustangs prior to them taking the field. (Van Wade/Orange Leader)

WEST ORANGE — The West Orange-Stark Mustangs are getting giddy.

First-year Mustangs head coach Hiawatha Hickman may be even giddier.

After a great first week of practice and going against each other in full pads in a scrimmage against themselves Saturday, the Mustangs are ready to face someone in a different colored uniform.

WO-S will lineup against the Woodville Eagles in their first scrimmage Friday at Dan Hooks Stadium.

“The first week of practice was great, but there was just something about putting on those full pads and getting after one another on Saturday,” said Hickman. “We saw a lot of positives for sure and we also seen plenty of things we need to work on.”

The Mustangs have enjoyed going all-out in full pads this week as they prepare for what awaits them Friday.

“The kids went after it good Monday and know we’re going to turn our attention a little more on Woodville to prepare for them,” said Hickman. “They like to line up in the spread, so we’re going to be looking at how to attack that with our defense.”

The Mustangs face almost the complete opposite in their second scrimmage Aug. 18, when they welcome in the Vidor Pirates.

“We like the two scrimmages we have set up, because they will give us to different looks,” said Hickman. “Vidor will roll in here in a couple weeks with their vaunted Slot-T and are very physical.”

Hickman is anxious to see what the Mustangs can do.

“Scrimmages are all about evaluating talent, especially those young kids that are on the varsity for the first time,” said Hickman. “If you make mistakes, scrimmages are certainly the time to make them. The officials are so helpful during them, too. They allow you to talk to the kids and instruct while they are on the field.”

Hickman also likes scrimmages as well with the entire coaching staff on hand to coach up the JV teams on the same night as the varsity.

The Mustangs JV will take on Woodville at 5:30 p.m. followed by the varsity at approximately 6:30 p.m.

“It’s fun to coach those young fellas, because they are definitely the future,” said Hickman. “We’re looking forward to getting a whole lot out of the scrimmage. Hopefully the weather will hold up good for us.”