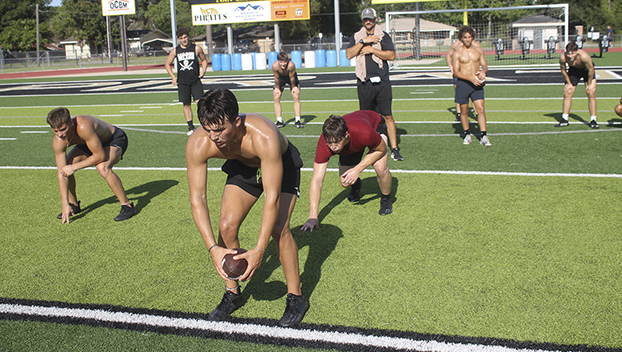 VIDOR – They have been preparing all summer long in hopes of repeating as district champions.

This week, it starts getting real for the Vidor Pirates and long-time head coach Jeff Mathews.

“That first official week of practice was a blast, especially when the kids got to go with some contact in our team scrimmage Saturday,” said Mathews. “They went after it pretty good against one another, but we, as coaches, made sure nobody was going to get their heads knocked off. You only have so many numbers, so we dang sure didn’t want any injuries.”

This Thursday, the Pirates see someone in a different uniform for the first time when they visit Bridge City to take on the Cardinals in their first scrimmage.

“The kids are chomping at the bit to face someone else, to see how much their hard work paid off throughout the offseason,” said Mathews. “We’re looking for a nice challenge against the Cardinals and we feel it will be a good test. I had lunch with Bridge City Coach (Cody) McGuire the other day and he likes the excitement of his kids and he’s doing a really good job over there. We’ll both get a good look at what we are strong at and what needs to be worked on for sure after we are done.”

It’s been rare in the past for the first scrimmage of the season to be on a Thursday instead of a Friday, but Mathews and Coach McGuire agreed.

“One, we’re ready to get things going to see where we are at as soon as we can, and, two, we want to go look at some other teams we face down the road on Friday,” said Mathews.

The Pirates, 8-2 last season, nabbed the No. 1 playoff seed and shared the Co-District title with Little Cypress-Mauriceville last season, and Mathews is loving how the Pirates came together throughout the summer. Of course, having 15 starters back certainly helped.

“With all of the key kids we had coming back, it felt like we were four weeks ahead when we started last week and that’s a huge plus,” said Mathews. “The work they put forth, we look at them, and it looks like they are in Week Four of the season kind of shape. We’ve just got to keep all these guys healthy because we really like our chances. Offensively, we always seem to be ahead of the game because we’ve been running the same offense for years and years, the kids know it in their sleep.”

Mathews wants to see quite a few things in the scrimmage with the Cardinals.

“First, I want to see our experienced guys, our seniors, play like they have been there before,” said Mathews. “And the other big thing is are how the kids play that we are putting in at new starting positions. Sure, we have a lot of starters back, but there are three or four positions on each side of the ball they we are looking to fill and we’re anxious to see who rises up.”

The Pirates will officially crank up their season Aug. 26 on the road at Silsbee.

“The kids are fired up for sure and we’re just ready to get going,” said Mathews. “They have been up here all summer long grinding away, setting themselves up for what we hope are a great few months ahead.”