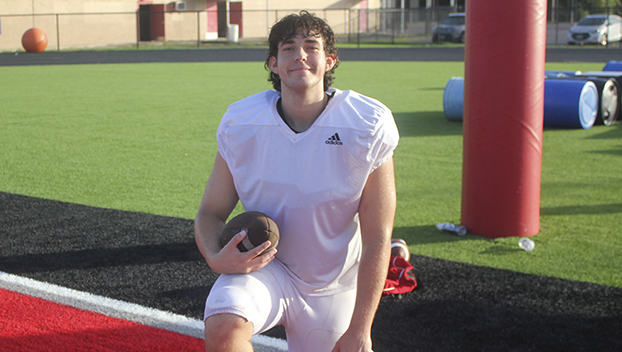 BRIDGE CITY – When it is time to get physical in the trenches, the Bridge City Cardinals certainly have faith in senior offensive tackle Matt Livingston.

Livingston has seen his share of battles at the varsity level the last two seasons, and now is ready to anchor the Cardinals offensive line heading into his final campaign.

“After we had a great summer with a great turnout, it was so awesome to be able to put the pads back on for real on Saturday and get in some contact,” said Livingston. “We’ve worked so hard for the last few months but there is just something about putting on those pads that makes it seem real and that we’re here and ready to go.”

Livingston likes what he sees in the Cardinals and is ready to go to work for second-year head coach Cody McGuire and the coaching staff.

“You could see the improvement we had with Coach McGuire last season,” said Livingston. “This year we were able to have a whole offseason with him and we knew a little more of what to expect. He really wants us to succeed. He pushes us hard, but pushes us hard in a positive way.”

Livingston, who made Honorable Mention All-District last season, has pushed himself hard throughout the offseason and feels he’s in the best shape he has ever been in.

“I had let my weight get up to 300 pounds, and I knew that wasn’t going to work. I had to get stronger and faster,” said Livingston. “I really punished myself through a lot of hard work. I got down to 230 pounds and now I’m close to 260 pounds, but I put on some more muscle and lost a lot of body fat. I also knew I had to get quicker and more mobile and I’ve been able to do that. I feel really good going into the season.”

The extra agility will certainly help Livingston at his position.

“As an offensive tackle, you really have to protect the edge to help protect the quarterback,” said Livingston. “I feel like I’m going to be able to do that a lot better this year. We have some nice schemes as far as double-teaming with our tight ends and guards. I think we will have good game plans for anybody we play.”

“Matt is one of the most solid kids I’ve ever had the pleasure to coach or be around,” said Hallman. “He’s so coachable, he soaks everything in and catches on really quick. He’s eager to pass that on to our younger kids. He’s also what I would like to call a ‘silent leader.’ He leads by example. He’s just a workhorse and has really pushed himself so hard since offseason to get better and you can see it now every day on the practice field.”

Livingston is looking forward to helping the young guys. He said they have a lot to learn, especially for those Friday night games, which are much different than playing JV, freshmen or junior high ball.

After having a team scrimmage Saturday, the Cardinals get to face someone in another uniform Thursday when they host Vidor in their first scrimmage.

“We had fun Saturday, but it’s not quite the same when you are lining up across from teammates,” said Livingston.

“We’re all fired up for it. It will help us show us where we are at, what we are good at and where we need to improve. I really think we have a chance to be really good as long as we stay together and work together.”

Livingston’s football days will likely come to and end after this season, so he’s excited about the year and what the future may hold for him.

“As a senior, I want it to be a year to remember and for us to keep on getting better and making the playoffs,” said Livingston. “As a senior group, we want to go out as winners.”

So what does Livingston foresee in his future?

“Football is not necessarily in my plans as far as college goes, but you never know,” said Livingston. “I would really like to go to the University of Houston and I would like to become a optometrist and help people with their vision. Get involved with laser eye surgery and stuff like that.”