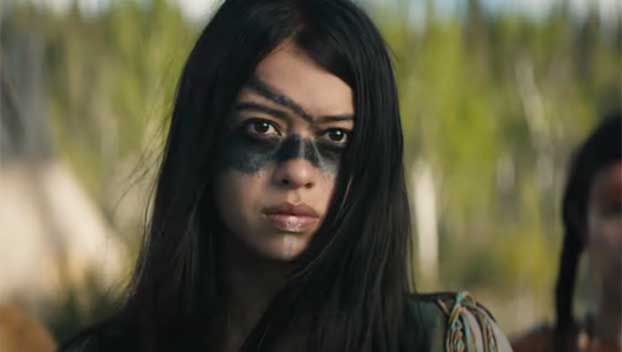 Naru, played by Amber Midthunder, is the featured star in "Prey."

It’s been a while since we’ve had a decent “Predator” movie.

Some critics would argue that other than the 1987 original, the five sequels have all been disappointing.

If that’s how you also feel, I have some good news. There’s a new movie being added to the “Predator” cannon. It’s called “Prey,” and I think it’s surprisingly good, ranking in quality right alongside the original film. You can stream it this weekend on Hulu.

The twist this time is that the story rewinds back 300 years, focusing on the Comanche people and their struggle to survive. The other big twist is that our hero is Naru, a young woman (Amber Midthunder) who wants to be a hunter, even while the members of her tribe keep telling her that it’s something that only men can do.

Well, she might not be as strong as the boys, but Naru is strong willed, resourceful and very smart.

That last attribute comes into play when she notices that an invisible creature is hunting her tribe. The audience knows that it’s the Predator monster who’s come to earth for a hunting spree.

All Naru knows is that something is threatening her people and it’s up to our heroine to protect them or die trying.

It turns out to be an exciting adventure with plenty of well-executed action sequences.

There are some guns in use here, but by placing the film in the early 1700s, most of the fighting is done hand to hand, using arrows, axes and spears. That makes the fight sequences particularly brutal, very bloody and ultimately quite thrilling.

I also appreciated that the filmmakers went out of their way to cast First Nations actors, as opposed to dressing up some Hollywood starlet in buckskin and war paint. That’s how they arrived at Amber Midthunder, and she proves to be an inspired choice in the starring role.

The actress proves to be very convincing at playing a young woman who’s facing impossible odds, but also determined to do whatever it takes to win.

I’m not as persuaded by the thread of feminist empowerment that underpins the early part of the movie. It seems tacked on in an effort to appeal to a modern audience. The same holds true for the introduction of some French fur trappers, who appear so as to give our heroine another group to fight, as if the showdown with the Predator wasn’t enough of a challenge already.

These issues aside, “Prey” should make fans of the “Predator” movies very happy. It features solid special effects, gorgeous outdoor cinematography, a kick butt heroine and some thrilling battle sequences.

Most importantly, the movie is a lot of fun.

Perhaps the producers should keep sending the Predator back into the past. As long as they keep making movies as thrilling as this one, I’d be excited to watch the Predator face off against King Arthur’s Knights of the Round Table, a legion of Roman Centurions, or even a bunch of cave men.

They all sound exciting to me.