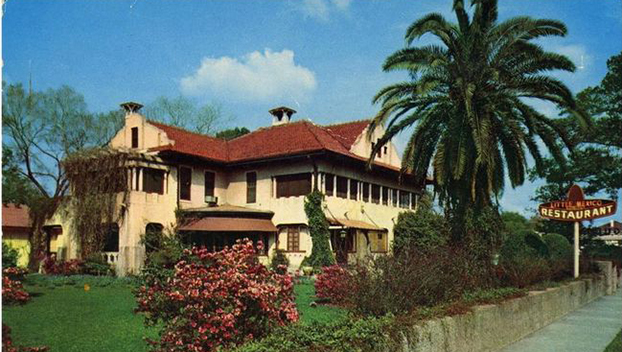 Frederick Henry Farwell's home on Green Avenue was converted to Little Mexico Restaurant in the 1950s. It has since been torn down. (This postcard is part of the collection: Rescuing Texas History, 2007 and was provided by the Heritage House Museum to The Portal to Texas History)

From the mid-1950s until the early 1970s, one of the last remaining mansions on Green Avenue in Orange was a popular Mexican restaurant.

To the diners from out-of-town, it was just a beautiful restaurant.

Frederick Henry Farwell had come to Orange in 1893 and began working for the Lutcher and Moore Lumber Company as an assistant bookkeeper. In 1902 he became the company’s general sales agent.

About this time he built the family’s home. It was a stucco, Spanish Mission styled mansion that would be the last of the great Victorian mansions built on Green Avenue.

In the western end of West Orange, Farwell built his Sabine Kennels to house and breed Smooth Coated Fox Terriers. Farwell’s kennel was a source of recreation for him, a hobby he wanted to excel at.

He was not satisfied in buying dogs from other kennels; he wanted to breed well enough to win some top shows.

The top kennel for the breed was the Norfolk Kennels. Farwell would have to breed well enough to face those dogs at major shows. He placed the purchasing of his first dogs in the hands of George Thomas, who would become his kennel master.

As a result of Thomas’ selections, and close attention to breeding, the dogs of Sabine Kennels would soon be marking their mark in the dog shows.

At the Westminster Dog Show in New York City in February, 1910, two of Farwell’s dogs became champions. Sabine Ferbie was named the best female in the show. Her brother Sabine Rarebit was named best male dog.

His dogs continued to compete in such prestigious shows as the Mineola Dog Show on Long Island and the Philadelphia Dog Show. His dogs won accolades across the United States and Europe. In 1913, Sabine Bandmaster was named Best Sporting Dog at the Dallas Kennel Club Dog Show.

Articles about and advertisements for the “famous Sabine Kennels” were often in Dog Fancier magazine in the years 1912, 1913 and 1914.

In 1920, he was named general manager of Lutcher and Moore. Even though his job as general manager took much of Farwell’s time, he was still able to find time to become a respected judge at shows, including Westminster. In 1940 he retired as a judge.

A photograph of Farwell taken in his study shows a number of silver award cups on the mantle of the fireplace and on a wall shelf. During World War II, Farwell donated a number of the cups to a metal drive. Several of the surviving cups are on display at the Heritage House Museum in Orange.

Farwell had a great interest in the future of Orange. One thing that he realized was the need for deep water access. He was instrumental in helping have Port Arthur established as a port of entry.

He knew that the digging of the channel to Port Arthur would be the first step in getting a channel dredged to Orange. Later this was done, giving Orange a deep water port.

In May of 1920, he was one of the signers of the resolution that stated the necessity of building a bridge across the Sabine River at Orange to replace the ferry. The resolution was signed by 18 other business leaders and taxpayers and presented to the Orange County Commissioners Court.

He is also given credit for promoting the building of the large wooden ships in Orange.

In 1946 he became president of Lutcher and Moore. Farwell died in 1947. His wife, Fannie, continued to live in the mansion until her death in 1952. After her death, the mansion became the Little Mexico restaurant.

For the next 20 or so years, many diners who ate in the various dark paneled rooms or on the porch that was converted into a dining area had no idea of the history of the old mansion and the family who lived there for so many years.

The restaurant closed and the mansion sat vacant for a while. It fell victim to progress. With the building of the Stark Art Museum, a parking lot was needed so the old home was torn down and the land paved over.