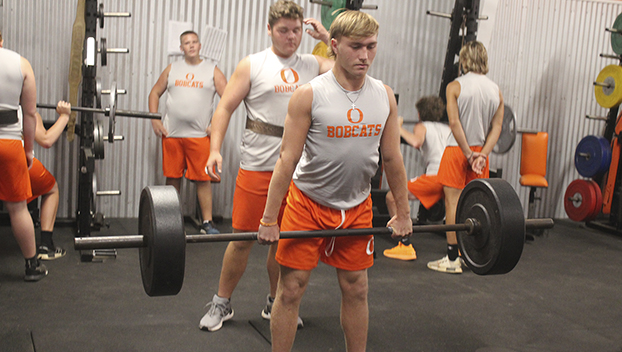 ORANGEFIELD – Though they have battled the rain and lightning element in early practices, the Orangefield Bobcats are getting plenty of things done during the first official week of the football season.

“Practices have been solid, we had about a 30-minute lightning delay on Monday, but we were up here an extra 30 minutes and the kids battled through it,” said Bobcats coach Josh Smalley. “With school starting next week, the Bobcats and the coaching staff have handled the schedule well to keep the momentum going.

“The first four days we’re starting at 3 p.m. in the afternoon and this Friday we’ll go at 9 a.m. plus we have our little Orange-White scrimmage coming up Saturday morning. Next Monday and Tuesday will go at it at 9 a.m. again and then by next Wednesday, we’ll all be back to school and will be going after school from then on pretty much.”

Smalley feels the that the Bobcats have prepared nicely throughout the summer and know what it is all about.

“For us, it’s about getting out here and getting a lot of reps,” said Smalley. “The best thing is, we’ve been in the same offense for the last 14 years and the kids know every play in the playbook. It’s just about catching up and grasping it again and they are doing a great job of that.”

Smalley said coaches are noticing some big guys, especially on the offensive line, which is important while replacing every starter from last year.

Those guys are getting a ton of reps, learning the blocking schemes and showing they are wanting to learn.

“These practices are really big for those guys — that, and our two scrimmages,” Smalley said.

Senior standout linebacker Beau Elkins is thrilled to get practice going for real, adding it has been a great summer with strength and conditioning.

“Everyone is so much stronger and more mobile,” he said. “I think our agility has improved the most. It’s just great to put that helmet on and go out and work on what we need to do. It’s the best time of the year.”

Elkins and the Bobcats are preparing for a new Class 3A district after going 7-4 and making the playoffs in Class 4A last season.

“Football is football and Class 3A is strong too,” said Elkins. “We’re going to be kind of the big guys in our district as far as enrollment goes, but numbers don’t mean a lot unless you show up every day and try to out work everyone else. Coach Smalley preaches that to us all the time. We know we have some tough teams in our district and they will be ready for us. I think we have a chance to be really good, though, as long as we stick together and believe in everybody.”

Elkins is happy to be a senior leader as looks to end his Bobcats run on a high note.

“I think we have a very good senior class as far as leadership goes,” said Elkins. “We’ve got quite a few young guys and we have to lead the way by example. We’re here to push them and also here to listen to them any time they need advice. As a senior, you have to be accountable and someone your teammates can come to at any time.”

After hosting LC-M and Silsbee in two scrimmages, the Bobcats have a nice non-district schedule stacked ahead as they take on Bridge City, Spring Legacy, Shepherd and Woodville.

Orangefield has some formidable tasks in district play. East Chambers has been a 3A powerhouse for years. Anahuac came on strong late last season. Never discount the Bobcats’ long-time rivalry with Buna. The Bobcats have been familiar with district foes Hardin and Kirbyville and will get a look at a newcomer in Tarkington.

“We expect a dogfight every Friday against those guys,” said Smalley. “I think it’s going to be a very competitive district and we certainly have a stout non-district schedule to get us ready for it.”