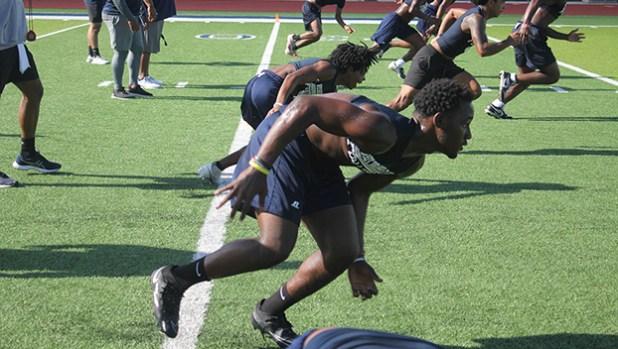 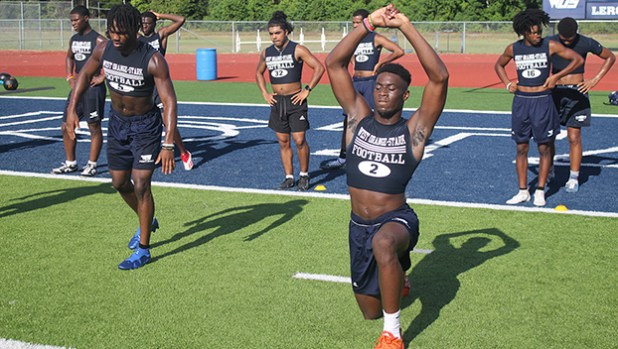 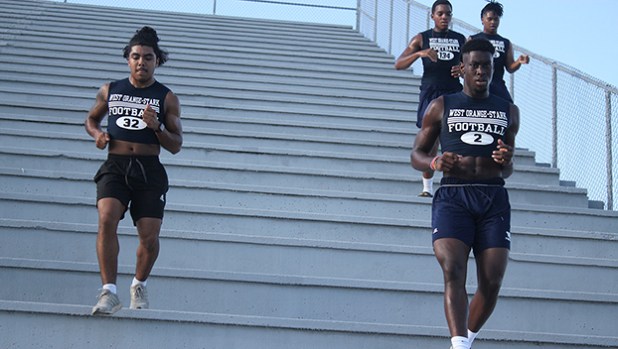 The WO-S Mustangs went through their traditional runs up Hooks Stadium Monday. They went up and down the steep stands 10 times prior to doing more conditioning drills. (Van Wade/Orange Leader)

WEST ORANGE – Some things never change in Mustang Country. First-year West Orange-Stark Athletic Director and head football coach Hiawatha Hickman made sure of it on the first day of practice Monday.

Just like legendary head coaches Dan Hooks and Cornel Thompson before him, Hickman gave a great “State of the Union” address to the Mustangs football team in the baseball stands at 8 a.m.

After that it was those dreaded runs up those steep stadium steps at Hooks Stadium that set the tone for the rest of the day.

“That’s just what we do around here; that’s the Mustang Way,” said Hickman. “That is such a tradition West Orange-Stark and the kids expect it. They know what we expect of them, and they were ready to go to work.’

Of course, the Mustangs, who are the winningest team all-time in the state by winning percentage, are looking to keep a lot of things intact this season.

The Mustangs are on a quest for their 12th straight district title. They are also on a mission to reach the 4A Region III Division II Finals for the 11th time out of the last 12 seasons. Sandwiched in between all of that were four trips to the Class 4A Division II State Championship games (2014-2017) that saw them win back-to-back titles (2015, 2016), as well.

“Of course, we always have high expectations around here, and the kids usually live up to them with hard work, and that all starts for real this week,” said Hickman. “We have a lot of key kids coming back, but don’t let that 15 number fool you, because several of those guys played on both sides of the ball.

“I think we’ll have much more depth this year, especially with our big guys. We’ve got some young kids that are stepping in, especially on the offensive line, that we are depending on. Hopefully that will mean we won’t have to platoon guys as much.”

Hickman was proud of the turnout on the Mustangs had an amazing turnout all summer long, which carried into the first practice.

“We’re doing quite a bit of conditioning this week early on,” he said. “We’re starting around 8 a.m. and then by 10 a.m. we’re working on our schemes and sets. The kids are chomping at the bit, awaiting Saturday when we can put all of those pads on and start making contact, but we’ve got a lot we want to accomplish before that.”

“You can tell looking around at everybody, how great our summer program was,” said Shaw. “We are ‘all systems go.’ We’ve been up here all summer long, but now it is time to get everything going. Nothing pumps you up like the first day.”

Shaw likes the Mustangs’ chances as the season is right around the corner, noting nobody works harder in Southeast Texas than the Mustangs.

“Of course, our goals are to go out and win district again, make a deep run in the playoffs and bring home a ring,” he said. “That’s the mentality we’ve always had here. We just have to maintain that focus and take on one opponent at a time. I know we are capable of it. We just have to do it all as a team, have confidence in everybody and support every teammate through the journey.”

“Just like I told the kids this morning in the opening remarks, it’s not what about they did last year, it all starts anew today,” said Hickman. “It’s all about going through our drills, learning some new schemes here and there, mixed in with conditioning and letting it all soak in. Once Saturday rolls around and we get that first contact, then it is all about getting ready for our two scrimmages. No looking ahead on anything, if anything, the focus should be on Nederland in our season opener.”

The Mustangs will not leave Hooks Stadium in August.

They host Woodville in a scrimmage Aug. 12, then will welcome in Vidor on Aug. 18 before welcoming in the Nederland Bulldogs in the opener Aug. 26.