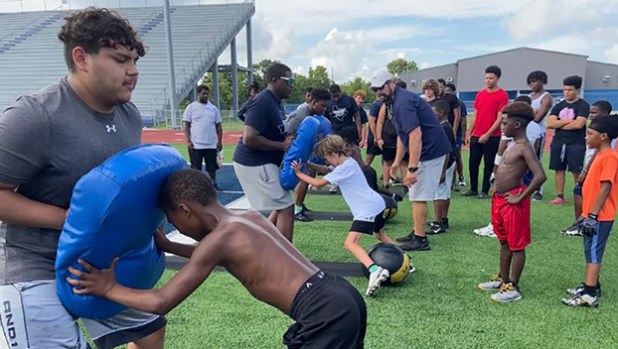 Kids of all ages had a great time at the free Mustang Football Camp hosted by the WO-S coaching staff. (Van Wade/Orange Leader) 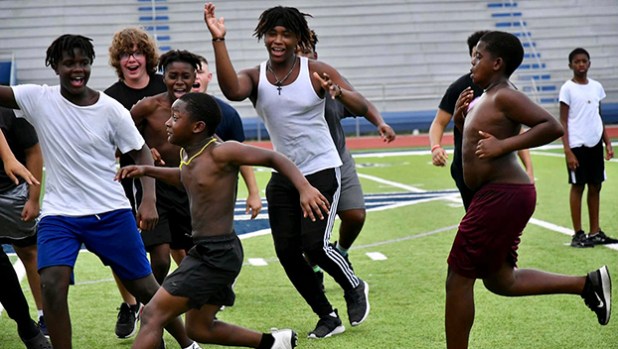 Kids of all ages had a great time at the free Mustang Football Camp hosted by the WO-S coaching staff. (Van Wade/Orange Leader)

WEST ORANGE – West Orange-Stark Mustang coaches and players had a blast this week, teaching some young and talented “future” Mustangs the ropes at the Mustang Football Camp at Hooks Stadium.

“We had a real blast with those kids,” said WO-S Athletic Director and head football coach Hiawatha Hickman. “Nothing like seeing the smiles on those young faces. The best thing about it was that it was a free camp.”

Hickman likes the numbers and expects it to grow next year.

“We had about 35 kids participating from the third to fifth grades,” said Hickman. “We had about 50 junior high kids come out. We plan to have it earlier in June next year, and I think we’ll have even more kids out there.”

Hickman and the Mustangs are ready to roll as they prepare for their first official practice Monday.

“Everybody will need to be in the baseball stands at 8 a.m. for the ‘State of the Union’ address,” said Hickman. “The kids are pumped up. The coaching staff is pumped up. We’re so ready to get it all going.”