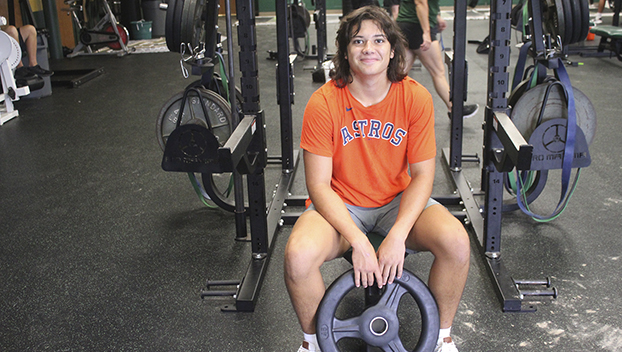 Dean Reynolds is known by coaches as a true leader at the school, whether it is on the football field, baseball field, in the halls or in the classrooms. (Van Wade/The Leader)

He may not be the “Dean” of the Little Cypress-Mauriceville district, those honors pretty much go to Superintendent Stacey Brister and Principal Ryan DuBose at the high school.

He is excited to lead the Bears on the field at quarterback this season for head coach Eric Peevey but is proud to do so many other things that help shape the program and the school.

“I really do my best to keep everyone in check and make sure everyone gets along, and I feel I’m the type of person that can get along with anybody,” said Reynolds. “I like to set an example for the younger guys.”

Reynolds breams with pride when he talks about the younger players who have shown up throughout the summer workouts this year.

That’s where it starts: working out, getting stronger and faster, he said Reynolds.

“As a senior, I really push these guys to be up here,” he said. “If they need rides, some of older guys are proud to drop by and pick them up. I love to inspire them and it’s great to get respect from them. It’s great to have those kids look up to you, so that just makes me want to do so much more. I’m telling you, the freshmen and sophomores coming in here are looking good.” 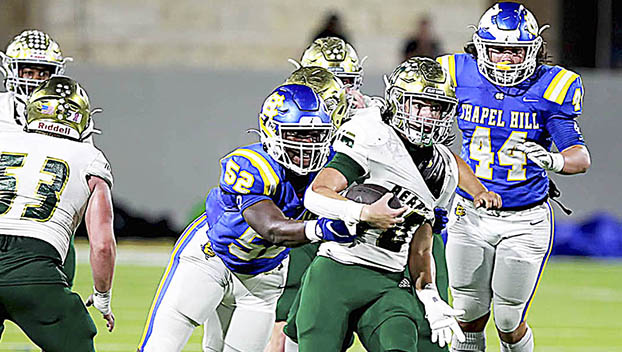 Reynolds was a key cog in last year’s 11-3 unit that advanced to the fourth round of the playoffs for the first time since 1997.

He played tight end, some on defense and was the punter.

He was First Team All-District tight end and now is thrilled to revert to his favorite position – quarterback.

“I was so used to playing quarterback, because it has always come natural to me,” said Reynolds. “I just feel more relaxed playing there and I just let it flow. I’ve been able to get stronger, and the best thing now is that I’m quicker than I was last year. I’m really ready to accept that role and I know I’m going to really have to be a leader in playing that position. Ashton Landry was great at what he did, and I feel I can do the same. It’s also fun when you get in a sticky spot, you can just hand it to No. 7 (Da’Marion Morris).”

Coach Peevey says Reynolds is one of those kids who is a natural born leader.

According to the coach, Reynolds will do anything you ask of him.

“He’s a kid that you want out there representing your team, school and community,” Peevey said. “He is involved with everything that goes on around here. He takes time to communicate with everyone he runs into. It doesn’t matter if you are a little-known freshman to a standout senior, Dean always, always has his ears open and is glad to give out advice.”

Reynolds, the son of Sommer and Danny Reynolds, gets it done in the classroom as well and is currently ranked No. 12 in his senior class.

“Growing up, my parents have always had my back and they always made sure that I thought school came first before athletics,” said Reynolds. “They have always kept me in check. It has never mattered how late I had to stay up, they have always made sure I do my homework, make sure I show up to class and be responsible for all of my actions. They have been such great supporters in everything I have done.”

Peevey said coaches could see Reynolds’ leadership qualities grow while he was on the baseball team as a junior.

“Man, you can really tell the work he has put forth this offseason,” Peevey added. “He’s stronger, much faster and more agile.”

Reynolds realizes teams will be getting after the Bears this season and that they won’t be sneaking up on anybody.

“Last year was so awesome because proved that anything can happen when you work hard,” said Reynolds. “I know I’m one of the guys that needs to keep everyone’s minds strong and focused and I’m happy to do that. We had some great seniors on last year’s team and we wanted to make sure they had a year to remember. As a senior this year, I would love to see the same out of our younger guys. It’s all about teamwork.”

Reynolds aspires to continue his athletic prowess at the college level. Not football, but baseball.

“It’s always been a dream of mine to play college baseball,” said Reynolds. “If it works out, that will be great. If not, I’m thinking about law school.”