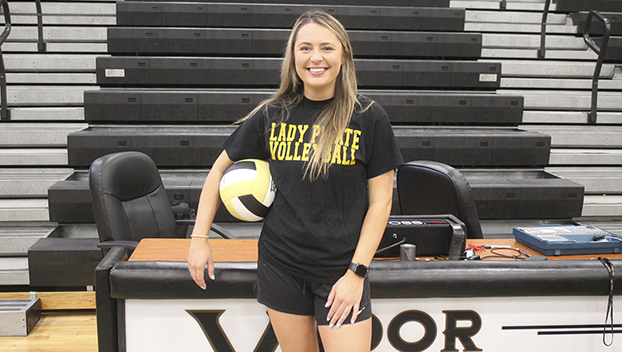 VIDOR – Chasing her dream and landing it.

That’s what Vidor first-year head volleyball coach Brooklyn Sampere found out when she landed the job after being an assistant the last four seasons.

Sampere, who was a standout on the Bridge City volleyball team for years before she graduated in 2012, is ready to get the Lady Pirates rocking.

“I was a little nervous at first at how it was going to go, but we’ve had the biggest turnout this summer that we have ever had,” said Sampere. “I’m so excited to lead a great group of girls. It’s always been a dream of mine to be a head coach. I always wanted to be a head volleyball coach, too, because volleyball has always been my passion.”

The Lady Pirates have never been a powerhouse in volleyball. Sampere was part of the staff when they went to the playoffs for the first time ever in 2018. Now, they have been to the postseason two other times since.

The program is much-improved, more kids are coming out and the interest has grown, Sampere said.

“We’ve got some kids that love the game and they want to get better,” she said. “They push their teammates to be up here and they’ve shown up in droves this summer. I’m excited about what the future looks like. We have some good players coming back, and I see so much promise in the future with our younger groups.”

The Lady Pirates earned the fourth-place playoff berth last year in what was a very competitive District 22-4A.

All the teams are on a quest to unseat two-time defending 22-4A champion Bridge City. LC-M and Lumberton will also play huge factors, along with Jasper, Silsbee and WO-S.

“We’ve proved we can compete with those teams,” said Sampere. “Bridge City is definitely the favorite again, but we know we have the talent to compete with them if we continue to believe in ourselves. That goes with everybody we play in the district. LC-M, Lumberton, those teams are tough. You just have to go out every match and be prepared to play hard and battle.”

Sampere knows what it takes after competing on playoff teams at Bridge City under the direction of former long-time Lady Cardinals coach and current LC-M girls track coach Becca Peveto.

“I’ve been fortunate enough to work with and get advice from amazing coaches for sure,” said Sampere. “But Coach Peveto, she is quite a backer of everything I’ve ever done. She left such a great legacy at Bridge City. She really pushed me to take this job and is one of my biggest fans. She was just as happy or happier than me when she found out.”

Another former Bridge City softball standout Nikki Trahan helps Sampere with the volleyball program, and Sampere has returned the favor in helping Trahan, the head softball coach for the Lady Pirates, on the diamond.

“It’s great to work with Nikki,” said Sampere. “It seems like we’ve known each other forever, and it’s funny how we always seem to know what the other is thinking. To work with her is a blessing every day.”

Of course, Sampere was the Orange Leader Female Athlete of the Year in 2012 following her success in volleyball, softball and basketball.

“I know one thing, I sure don’t have the ‘hops’ like I use to, but I still play volleyball here and there, especially on the weekends,” said Sampere. “I get in their and mix it up with the kids from time to time and they have fun with that.”