Vidor’s “warrior” Jason Watson grinding on, has big goals for Pirates in 2022 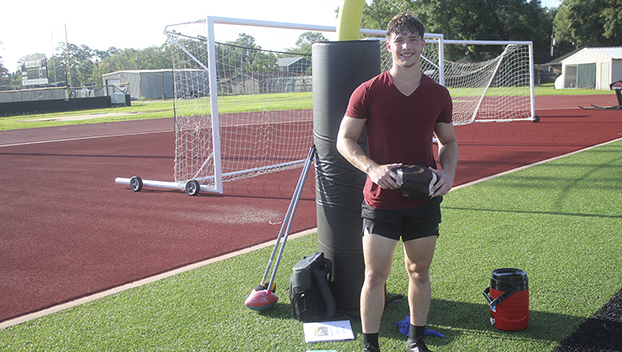 Vidor senior Jason Watson is ready to leave it all on the field for the Pirates again on both sides of the ball as they chase another district title. (Van Wade/Orange Leader)

VIDOR – When it’s time to rumble on Friday nights this season, the Vidor Pirates certainly know they have a warrior in senior veteran Jason Watson.

Watson is heading into his third season starting at the varsity level for long-time head coach Jeff Mathews, and he is chomping at the bit at trying to help the Pirates to another district title and top district seed in the playoffs.

“It’s been a great summer up here,” said Watson. “We really all worked as ‘one’ to get better. That’s the thing, when you play for the Pirates and Coach Mathews, we’re all about being a ‘team’. That’s our mindset. We also feel like every year we have something to prove. We’ve never worked harder than we’ve had this summer. Not only have we gotten stronger than last year, our stamina is better than ever.”

Watson never shied away from playing on both sides of the ball.

He played a lot at fullback as a sophomore, some as a junior in which he also played on the offensive line, and he started every game at defensive end last season, too.

“I just love being on the field and doing everything possible to help us win,” said Watson. “I’m thrilled that the coaching staff has faith in me and can depend on me wherever I line up. In our offense, you’re always active no matter what, whether you are running the ball or blocking up front.”

Coach Mathews has always loved what Watson brings to the table.

“He’s one of those kids that will run through a wall to help out the team and he’s such a great leader. The younger kids look up to him so much,” said Matthews. “He’s one of those guys that if you tell him to run 20 yards, he will run 30. He was like that when he came in as a freshman and he has not changed a bit. He’s a ‘team guy’ and he’s one of the first ones every day to get all of the guys going.”

Watson loves the grind of the Pirates Slot-T offense and what it forces opponents to do.

“There is no secret, everybody that we play knows what we are about, but can they stop us?” said Watson. “We like to wear our opponents down and we love dictating the tempo. When we really get fired up is when we see teams wear down late in the second quarter or in the third quarter. That really pumps us up more. We always want to be the more physical and stronger team.”

Mathews is proud of the attitudes Watson and the Pirates possess.

“We’ve got a group of guys that just love getting after it,” said Mathews. “They just have the mindset that they are going to out work everybody and they do it. They battle through injuries all of the time and bounce back quick. Jason broke a bone in his foot late in the season last year. He comes limping off and kept saying, ‘I’m still good to go coach.’ He meant every word he said, too. He’s just a warrior in every sense of the word. He leaves it all in the field. I like to think back to that Jasper game he had last year. He had like 16 tackles and ran for over 140 yards.”

The Pirates return seven starters on both sides of the ball from last year’s 8-2 co-district champion and the district’s No. 1 playoff seed.

“We’ve got a chance to be really good because we have so many starters back plus a bunch more that played,” said Watson. “Everyone knows all of the schemes, and the plays. We’re already on the same page. Now we just can’t wait to get going for real with that first practice Monday.”

And one Pirates tradition will continue. The first practice Monday will be at 5 a.m.

“When my alarm clock goes off at 4 a.m., I’m going to be ready to go. We all are. We are fired up,” said Watson. “That’s a tradition we love. Plus we will be starting practice at 6 a.m. after that and it goes right into our first period athletic class when school starts, so that works out great.”

Watson and the Pirates have a solid non-district schedule before jumping into the district fray.

Big battles with Little Cypress-Mauriceville, Lumberton, Huffman, Livingston and Splendora are ahead.

Despite being the No. 1 seed, Vidor is still being predicted to finish around the third-place spot, despite returning so many starters.

“Around here, we’re always looking for respect, but that’s fine, that’s the way we like it,” said Watson. “There are some really good teams in our district again this year that will be ready to get after us.

“We look forward to the challenges in front of us and we won’t be backing down. Our goal is to win the district again and get further in the playoffs. We’ve got so many players back that know what it is about, and our stamina is so much better going into this year. If we all stay together and play for one another, I really like our chances.”