FILM REVIEW — “Not Okay” proves to be more than okay 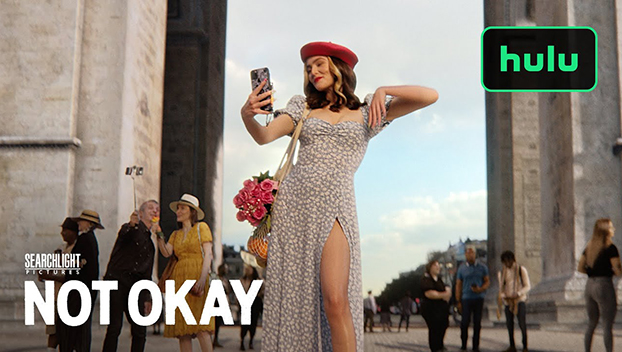 The new Hulu movie “Not Okay” begins with a title card warning us that the film contains “flashing lights, themes of trauma and an unlikeable female protagonist.”

That character would be Danni (Zoey Deutch), and boy is that warning appropriate.

Danni is an editor who dreams of becoming a writer for her company’s website. The problem is her ideas are mind-numbingly bad — such as her pitch about having FOMO over the 9/11 attacks.

In order to boost her online cred, Danni fakes a trip to a Paris writers conference.

She’s in the process of photoshopping herself into Parisian Street scenes when terrorists bomb the City of Light, and the online world turns its eyes toward the poor young woman traumatized by the attacks, even though she was really holed up in her apartment in Brooklyn.

Danni decides to continue the ruse, which brings her Insta-fame and a new friend in the form of a school shooting survivor (Mia Isaac), but also renewed scrutiny from a jealous co-worker (Nadia Alexander).

Will our unlikeable heroine survive her self-imposed problems on the way to a happy ending?

In a bit of a surprise, the answer turns out to be no, a decision which ultimately makes “Not Okay” into something decidedly better that just “okay.”

This is a film that begins as a cheeky satire of online culture, but the terror attack forces the film to take a more serious tone. Suddenly there is real trauma underpinning this movie that felt like it was only going to be a mindless social media satire.

There are pros and cons to this change of tone. On the one hand, there is some very amusing stuff here, such as an influencer event that seems to mostly exist as a photo op.

Deutch is very good in these scenes, making her unlikable character just likeable enough to allow us to stay invested in the story. That’s no small task, and Deutch deserves credit for her considerable acting and comedic skills.

On the other hand, the comedy doesn’t always mesh well with the serious moments. There is no doubt Danni’s new friend was traumatized by the school shooting, and thanks to Isaac’s superb performance, your heart feels for the wounded young woman. It’s hard to laugh when you’re also crying inside.

There’s another mismatch in the budding love story with a weed influencer (Dylan O’Brian) who only notices Danni when her followers count start to rise. I suppose that is part of the satire, but it just doesn’t seem to fit into the larger themes of the movie.

I wish the filmmakers had cut this subplot and spent more time focusing on the friendship between the two young women.

All of which makes “Not Okay” into a better than expected, but still messy dramedy.

I certainly enjoyed the performances by the central characters, and 27-year-old writer/director Quinn Shephard is definitely somebody to keep an eye on.

Her take on an unlikeable female protagonist turns out to be rather likeable, even if it’s only a better than average comedy.

MASTER GARDENER — Take these soil basics to heart, from microbes to pH

VAN WADE — Texans may not be stout, but should be fun to watch