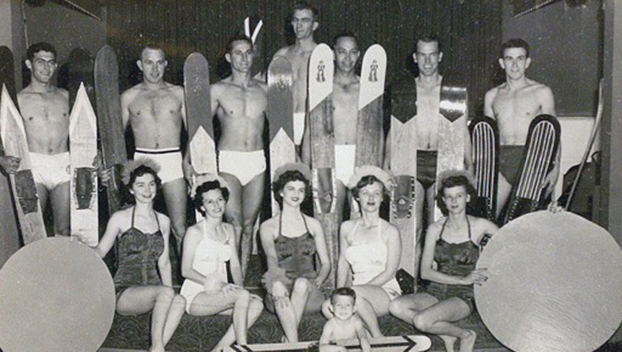 A collection of several group photographs of the Aqua Demons and Debs can be seen inside Sprad's Boat Town in Orange. Dave Ryan/The Enterprise

Harnett T. Kane wrote books about the South and referred to New Orleans as “The Queen City on the River.”

The same could have been said about Orange in the 1950s. Orange had a lot going on with the river in that period of time.

The U.S. Navy had the reserve fleet with hundreds of boats and ships and personnel. Consolidated Shipyard was still busy after the War Years. Levingston Shipbuilding was building almost anything that could float.

DuPont had become the first petrochemical plant to call Orange home and was producing products for the new plastics industry. Downtown Orange was still an active shopping district. Orange was thriving.

Along with the business climate, there was a lot going on for recreation. One of the biggest events in the area was the annual water festival held on the river downtown. The stars of the show were the Aqua Demons and Debs, a group of friends who had become incredibly talented on water skis.

In the early 50s some friends had begun to water ski together. That was a fairly new sport, and the sky was the limit. Some of that early group included Hubert and Margaret Spradling, Bill and Helen Thraikille, Charlie and Joette Webb, Bob and Vera Roach, Betty and Sonny DeVille, Jean Stakes, Roger Hudson, Mickey Godwin, Leroy Boehme Jr., Dick Didrikson, Glen Rambow and Charlie Whittaker.

The friends decided to put a small ski show together and attend the Cav-Oil-Cade in Port Arthur in the summer of 1953. The show went well and the group decided to organize formally in February 1954.

Their first water show was the Neches River Festival in Beaumont, a second appearance at the Cav-Oil-Cade followed and then in 1955 the first show in Orange, the Orange Boating Club Show.

Held at “the new hotel site,” it was a two-day exhibition of boats, boating and skiing skill. It started with a parade of trailered boats down Green Avenue. Once the parade reached the river, the show began on the river.

There was a ski jumping contest and an exhibition of trick skiing by the Aqua Demons, the men, and Aqua Debs, the women. The highlight of the show was Charlie Webb driving a light boat over the seven foot high ski jump ramp.

By 1956 the Demons and Debs had elaborate costumes and equipment worth an approximate $10,000 and had become rated as the best organized and equipped water show team on the Gulf Coast. The club membership had grown to 20 members.

That year they were invited to the East Fork Sportsmen’s Club Water Carnival, held on Lake Lavon near Wylie, Texas. They were invited back to Wylie in June, 1957. The local paper reported the ten-act ski show had been seen by about 175,000 people in the last year, and they were expecting attendance to approach 80,000 at Wylie that year.

Charlie Whittaker had taken some aluminum tubing and a piece of nylon cloth and built an 8X10 foot kite. Whittaker would hang beneath the kite and be pulled by a fast boat.

He would eventually reach speeds of 35 miles per hour, go to 60 feet high and be pulled for one mile. Once Whittaker lost his grip and took a 60 foot fall, thankfully, he was not seriously injured.

Club Captain Hubert Spradling once said the club had too many invitations: “It’s impossible for us to travel to the shows we are invited to because we all work for a living.”

A new program called “Water Skiing Extraordinary” began in 1957. The first performance of the new show was for the opening of the Jack Tar Orange House.

Appearances included the Neches River Festival, Cav-Oil-Cade, Splash Day in Galveston where the show was performed at East Lagoon for an estimated crowd of 75,000, The Louisiana Shrimp Festival in Morgan City, Louisiana, The Austin Waterama, and shows in their hometown of Orange.

The Demons and Debs were the feature attraction at Galveston each year and were covered by national TV and movie crews. There were articles in Life and Look magazines.

Each summer the water show was highly anticipated. During the two-day shows thousands lined the river bank to watch the fast moving colorful skiers known as “Orange’s Own Aqua Demons and Debs.

That they were the most talented and dedicated water show troupe on the Gulf Coast was without question.