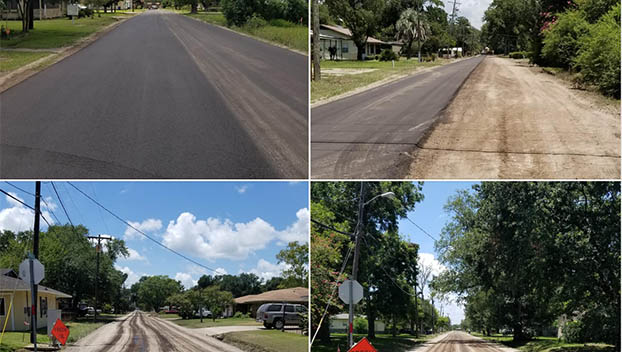 WEST ORANGE — The streets of West Orange are getting a much-needed facelift, which city leaders hopes to complete by the end of summer.

“Our streets have been affected by floods a couple times in the last few years, especially after [Hurricane] Harvey and Ike, as well,” Mayor Randy Branch said. “Any time you have water inundating over roads, it’s going to cause problems with them.”

Public Works Director Jon Sherwin said the city is trying to complete the project before the start of school because a portion of roadway that must be paved sits in front of the high school.

“That’s our goal, to finish before August 10,” Sherwin said.

According to Sherwin, the 2022 project approved at the Nov. 8 council meeting included 719 square yards of concrete repair, 7 lane miles of asphalt paving and 508 feet of guard rail installed.

The project is approximately 84 percent complete.

“The immediate future for street improvements is the resurfacing of Western Avenue from Irving Street to Foreman Road,” Sherwin said. “This project is expected to take approximately 20 working days.”

Grant money is helping the city pay for the majority the work, while the rest will be paid using the 4 percent sales tax that was voted on in the last municipal election.

The work also includes the rehabilitation of roadside ditches throughout most of the town, which includes removing and replacing almost two miles of driveway pipe and re-grading/cleaning of six-and-a-half miles of ditches and existing culverts.

“By resurfacing the streets through this project, we expect to see increased lifespan of the street with little to no maintenance for several years,” Sherwin said.

Resident Mike Andersen said he appreciates the renovations and the clean-up in West Orange.

“The end result will be worth the inconvenience,” he said.

Rickey Blagburn, a resident for 59 years, also praises the city for the current efforts.

“I have never seen so many roads fixed at once in the city,” Blagburn says.

The roadwork is just the beginning, as Branch is on a mission to also remove dilapidated housing, with approximately 30 homes that need to be assessed for possible demolition.

“We’re going to be getting started on those pretty quick,” Branch said. “The program has helped us get owners of the properties to remodel or tear down themselves and do something productive with the properties.”

It’s a long process from start to finish, but Branch hopes in the end, citizens of West Orange will be happy.

“Hopefully, our citizens will just be patient,” Branch said. “They’ll really enjoy that new road when it gets done.”