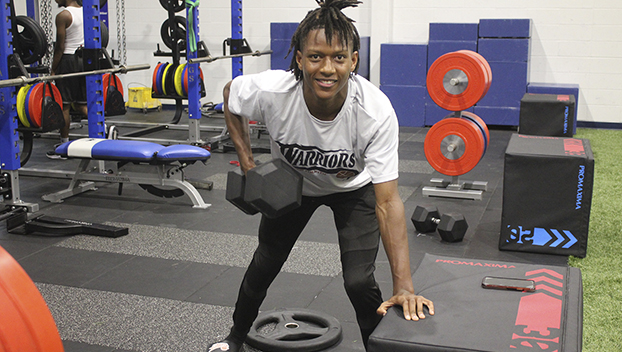 West Orange-Stark wide receiver/defensive back Darren Anderson is proud of how the Mustangs worked out all summer long in preparation for the season. (Van Wade/Orange Leader)

WEST ORANGE – After getting his feet “wet” on both sides of the football at the varsity level last season, West Orange-Stark senior Darren Anderson is expecting big things of the Mustangs and himself as the 2022 season approaches.

“We are so ready to get things going for real next week,” said Anderson. “We’re all so pumped up. We’ve been up here all summer long and everyone looks so good. We’re all in such amazing shape. We’re just ready to get those helmets on Monday and then get into those pads by that next weekend for sure.”

Anderson played a nice role on both sides of the ball last season. He caught a few critical passes during the playoffs at receiver and made some strong plays at safety and cornerback on the defensive side.

“It was definitely an adjustment for me playing on Fridays last year, because the speed of the game and the atmosphere are both so different,” said Anderson. “The big crowds, the bands, it’s so great to just soak all of that in. I felt good, though, when I got a Pick-6 in my first varsity game against Nederland. That was a confidence builder and felt like I was able to improve every week after that.”

Anderson is ready to produce on both sides of the leather again.

“I’m all about where ever the team needs me to be,” said Anderson. “I love catching the ball but I get just as much of a thrill blocking so our running backs can get down field. We’re going to play at a little faster pace this year and spread the ball around to more guys. We have a lot of players that have plenty of skills, so I feel we’re going to be hard to stop.”

“Darren is one of our seasoned guys and loves to be coached,” said Hickman. “We expect big things from him in his last year for sure.”

Anderson is part of a “loaded” secondary that also includes the likes of Jamal Shaw, Jailen Brown and Dakarion Judge.

“It’s great to be back with those guys again,” said Anderson. “We each know what it is all about. We know it’s going to be hard to get completions on us and hard for anyone to go over the top of us.”

“That’s a pretty tough secondary across the board and all of them will be contributing offensively, too,” said Hickman. “Darren is a big part of our defense. He proved that last year. He’s also a good X Receiver. The best thing about that kid is his leadership. He is definitely one of the best we have and he’s always pumping up the younger kids. He just gets everyone fired up.”

“It’s great to know that Coach Hickman and the coaching staff has faith in me,” said Anderson. “They really believe in all of us. They push us hard, but we also know they love us. That’s what it is all about.”

Anderson is certainly fired up for the season to crank up and knows the expectations.

It just goes with the program.

“Nothing changes around here, we want to win a district championship, get past the fourth round of the playoffs and get us a State Championship ring,” said Anderson. “It’s going to take a lot of work and energy, but I really believe we have the talent to do it.”

Anderson and the Mustangs don’t pay a lot of attention to predictions.

“For us, it’s all about preparing from one week to the next,” said Anderson. “Our non-district will definitely have us prepared when you talk about Nederland, LC-M, PN-G and Newton. Nobody schedules non-district games like we have always done. I think we’re going to be really good, we’re just going to have to prove it one Friday at a time and not look ahead.”