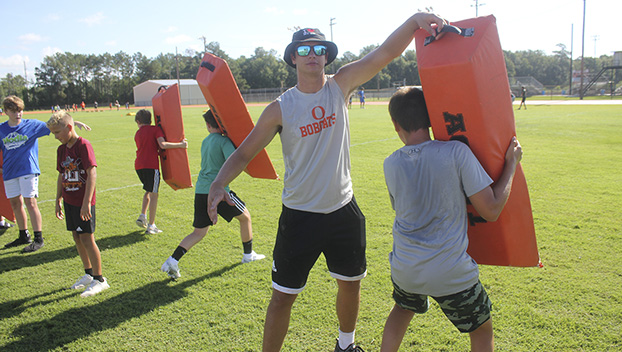 ORANGEFIELD – Orangefield’s Koen Maddox always tends to have a big smile on his face.

However, don’t let that fool you. When he is on the football field, he doesn’t mind throwing people around.

He’s been busy all summer, not only getting stronger, but getting the younger guys to buy in to what he feels should be a great season.

“We’ve had a really good summer and a lot of guys have been up here,” said Maddox. “We’re counting on some of the younger guys to step in and fill some spots on the offensive and defensive lines, so they have been up here learning a lot.”

Maddox already knows all about what goes on in the trenches, as he is entering his third year on the varsity.

“It’s definitely a different kind of game on Friday nights,” said Maddox. “You find out that everyone is so much stronger and quicker on that level. I like where we are at, though. We’re lifting more weight then we ever have before. We’re so much stronger. Now we have to make sure we move that strength over to the field.”

“It’s really a fun offense, especially because you can knock people off the line, and I like the contact,” said Maddox. “There is nothing quite like getting the defense to bite, and then get good blocking angles on them and our backs find the edge. That’s what it is all about.”

Maddox also embraces what the Bobcats offense does.

That means wearing people down, frustrating them and give their own defense as much rest as possible. The offense is designed to eat up the clock with long, sustaining drives.

“When we get those 16-play drives going, you can just see the panic in defenses,” Maddox said. “Of course, we are capable of breaking those 40- and 30-yard gains, especially late in games when we’ve worn them down. That really gets our crowd going.”

Coach Smalley is thrilled with what Maddox brings to the table.

“Koen plays ‘dirty,’ not meaning that he does wrong things, but he does all of the ‘dirty’ type of work where it is gritty and tough at everything he tries to do,” said Smalley. “He’s always giving extra effort and is so coachable. He’s always pushing himself to get better, and the other kids see that. That is what you want out of one of your senior leaders.”

Maddox will play more at defensive end this season. Maddox and Morgan Sampson make an excellent 1-2 punch on both sides of the ball.

“We feel blessed to have bookends on offense and defense with those two guys,” said Smalley. “They are both competitors. I can’t wait to see what Koen can do on defense, because I know he is pumped up about it.”

“It’s going to be cool with Morgan (Sampson) on one end and me on the other,” said Maddox. “We really want to create trouble for our opponents. We both play tight end on offense, too, so we always know what the other is thinking. I think we make a pretty good combination.”

Maddox and Sampson have also made a strong 1-2 punch for the inside game on the Bobcats basketball team, but first things first, it’s football season.

The Bobcats moved back down to Class 3A after competing so well in the 4A ranks the past couple seasons.

They are one of the early favorites to be a district title contender.

“One thing about us, we’ll compete on whatever level we’re playing at,” said Maddox. “Coach Smalley just wants us to be prepared. He has told us all summer that we are no longer the ‘hunter,’ we are the ‘hunted’ since going down to 3A.”

Maddox knows the Bobcats will have to prepared against the likes of Anahuac, East Chambers, Buna and several other district foes.

“We know what those teams are about and we know they have a lot of talent, we’ve seen it,” said Maddox. “We played them in junior high and when we were freshmen. We have beat them and we have also lost to some of them. We know we can’t just show up and expect to win, we have to be ready every week because we know they will be ready for us.”

One thing for certain, Maddox wants to go out as a Bobcat in style.

“As seniors, we want to win an outright district title, I don’t know how many years that it has been,” said Maddox. “We want to be a group that our fans always remember, that’s why we have to be up here every day, doing our best to improve and be a great team that works together.”