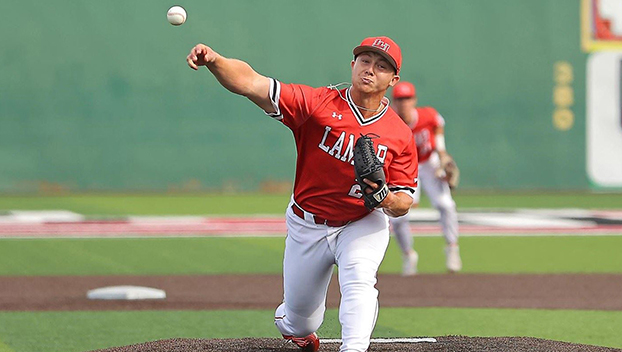 After a superb run as a closer and all-time saves leader at Lamar University, former West Orange-Stark standout Jack Dallas will continue to hum his fastball.

“It’s an awesome, awesome feeling,” Dallas said. “It’s kinda been a whirlwind, but it is a dream come true. I’m still chasing my dreams.”

Though his name wasn’t called during the 2022 Major League Draft, Dallas’ confidence remained high about getting a shot somewhere.

As a matter of fact, Dallas was on a short vacation with his family in the San Marcos area when some of his former teammates and coaches were trying to reach him to tell him the Phillies were very interested.

“It was hard for people to reach me because the service on my phone was really bad,” Dallas said. “Then my phone started to blow up with words from my agent, teammates and friends.”

The Phillies definitely showed some interest, so Dallas and his agent went back and forth with the Phillies and a deal was struck. The Washington Nationals also showed interest before the Phillies snagged him up.

Dallas flew to Tampa Bay Sunday, then drove to Clearwater, Florida, where he’ll be going through team physicals and a draft camp before being assigned in the organization.

“It’s been a quick turnaround for sure, from floating the river with my friends and family, to flying out to Florida and getting to Clearwater,” Dallas said. “But the support I’ve been getting from my family and friends has been amazing. I’ve always had that, which I’ve always been grateful for.”

Dallas’ addition to an MLB franchise roster is nothing new for Lamar, which has seen Major League Baseball scouts beat a path to the Golden Triangle over the years.

Brother of 2021 MLB draftee, Chad, Jack elected to remain close to home and play for the Cardinals, originally coming to LU as a two-sport start (quarterback and pitcher). After a fabled high school career with the Mustangs and leading the football team to back-to-back Class 4A Division II State Championships in football at quarterback, Dallas signed to play football and baseball with the Cardinals before eventually putting his full-time focus into baseball.

All Dallas did after that was go on to set several school records, including the school’s all-time mark for saves and appearances, as well as the single-season record for saves (twice). Dallas also closed out his career by earning all-conference honors as a junior and senior (first team), and holds the unique distinction of being just one of two Cardinals to ever earn All-Southland and All-WAC honors with Chase Kemp.

“Great memories with Lamar for sure, and that’s a big reason why I’m where I’m at now,” said Dallas. “I remember struggling as a freshman with my fastball and trying to get strikes across, but my coaches continued to believe in me. I got stronger and more confident and my teammates were always there pushing me on.”

During the 2022 regular season, Dallas made 25 appearances, posting a perfect 4-0 record with a league-leading 13 saves. He struck out 51 batters in 38.2 innings of work while posting a 1.86 ERA and a 1.19 WHIP. Dallas’ saves this past season set a new LU single-season record, breaking the mark he set in 2021.

Over the course of his career, Dallas made 96 appearances, recording nine wins, with 170 strikeouts in 166 innings pitched.

Now its on to the professional level, where every pitch and batter he will face will be a challenge. But Dallas has never backed down from challenges.

He has mowed down a lot of batters in his high school and college days with a solid fastball and a “mean” slider. Now, one of his main goals is developing a better change-up.

“I’m just honored to have this opportunity and see where it takes me,” said Dallas. “I don’t know for sure where they will send me but I’m looking forward to it all.”