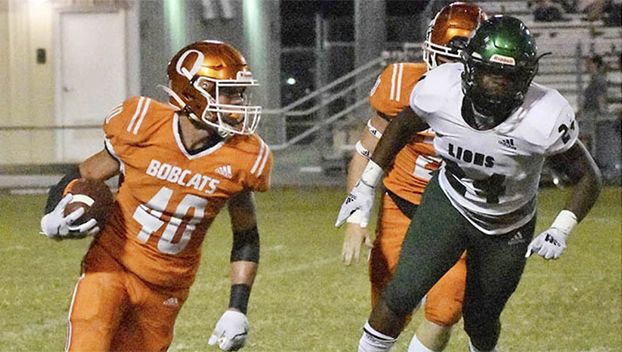 The Orangefield Bobcats have had an incredible run during summer workouts as they are getting prepared for the upcoming season.

The first official day of practice is Aug. 1, and longtime Orangefield coach Josh Smalley believes the Bobcats are ready to tackle it head-on.

“We’ve had a great offseason for sure and have had an amazing turnout; it’s probably the best summer we’ve had,” said Smalley. “The kids have really bought in and have gotten so much stronger and faster.”

“When we brought in Coach (David) Kendrick last year, he’s a certified strength coach, he has done wonders with the kids,” said Smalley. “What they have been benching and squatting has surpassed more than what I thought possible and they just keep lifting more and more weight. Coach Kendrick really inspires them in a positive way when they work out. What he has done with our younger kids like our sophomores and freshmen, it’s been great.”

Smalley feels the Bobcats will be ready for the Southeast Texas heat when that first week of practice rolls around.

“Kids are kids, and they learn how to adjust to the heat well,” said Smalley. “It is a little hotter than usual, but we all know how the weather can change in a hurry. The thing right now is that it has been so dry and humid, and we’re use to getting more rain during the summer. We’re always OK as far as battling it, though. One of our top things is to always make sure all of the kids are hydrated.”

The Bobcats will hold their first practice at 4 p.m. Aug. 1.

“The kids are so excited and pumped up, it’s always a great time of the year, just because they have been anticipating it for so long,” said Smalley. “We’ll go after it from about 4 to 6:30 p.m. those first few days.”

The Bobcats, after making the playoffs the last two years in Class 4A Division II, move back down to the Class 3A Division I level this season. The last time the Bobcats were in 3A they went 9-2 in 2019.

“Number-wise, we hope it is beneficial to us,” said Smalley. “That doesn’t mean you are going automatically go out there and win every game. We found that out in 2018 when we dropped back down and didn’t make the playoffs that year. I think the kids understand that. Also, it doesn’t matter what ‘A’ you are in, you have to stay healthy. That’s always a big key.”

The Bobcats have a couple home scrimmages before the season kicks off for real Aug. 26 at home against Bridge City in the Bayou Bowl.

“We’re going to get two good tests right there for sure,” said Smalley. “LC-M is loaded again, and we’ll get a look at that beast they have at defensive tackle in Amier Washington. That will be a big test for our offensive line, which we’re basically having to replace the whole starting lineup. Then we also get to chase around their 1,800-yard back in Da’Marion Morris. Silsbee, those kids looked good last year. They are so athletic and they are still young. They were mainly sophomores last year.”

The Bobcats coaching staff will be busy, but “fun busy” next week Monday-Wednesday from 9 -11:30 a.m. when they host the Bobcat Football Camp for all of the local youngsters.

“It’s always a great thing that we look forward to each year,” said Smalley. “It gives us coaches an opportunity to spend some time with future Bobcats.”