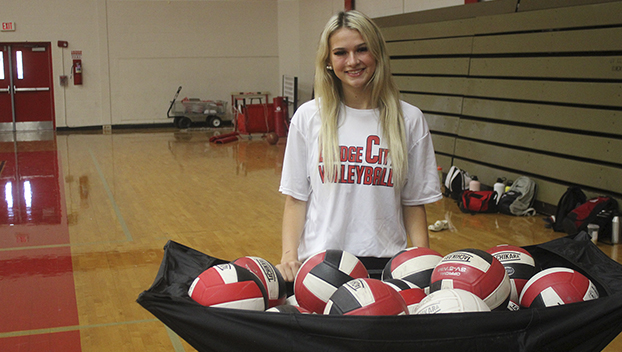 Bridge City senior Taryn Doiron is excited to help lead the Lady Cardinals to another strong volleyball season after being named the 22-4A Setter of the Year the last two seasons. (Van Wade/Orange Leader)

Perhaps nobody does it better, arguably, throughout Southeast Texas.

One thing for certain, Bridge City senior volleyball standout Taryn Doiron will go down as one of the best setters to ever play in Orange County.

“The last two years have been so awesome,” said Doiron. “We have high expectations again this year as a team, and I have high goals for myself too. We lost some key players but we have some younger ones ready to step up. We’re going to have to be ready, because everybody will be bringing their top games to try to knock us off the top in district.”

Doiron has certainly been on top of her game, making sure the Lady Cardinals’ top hitters at the net get the best setups possible.

Doiron has been the Setter of the Year on the All-District and All-Orange Leader teams the past two years. As a junior, she posted an almost unheard of 1,013 assists.

“My main goal is to give our hitters the best chance to succeed at the net,” said Doiron. “It’s tougher than it looks, and it takes a lot of practice. You have to be in sync with your teammates. Each one likes the receive the ball in certain spots and practice makes perfect.”

Two of the key players the Lady Cardinals lost to graduation were Harlee Tupper and Caryss Carpenter. Those two combined for 620 kills and 805 digs.

However, Doiron realizes the cupboard is certainly not empty.

“We have Demi Carter and Morgan Louvier back to lead us in attacks, and Makenna Carey is back and is so versatile,” said Doiron. “Demi really came into her own last season. You could just see the confidence grow with her. Morgan moved in here last year and was incredible. Both of them really know how to kill it. Makenna has a great overall game and is a strong defensive specialist.”

Doiron just doesn’t set the offense up, she gets around the floor. She had 245 digs, 108 kills and led the squad with 126 aces.

“I try to have a strong overall game and will do anything to help make us successful,” said Doiron.

DeLuna is definitely leaning on Doiron to pave the way for the Lady Cardinals.

“She has proven that she is a leader already, so she is definitely ready to be our sparkplug this year,” said DeLuna. “She sets the tone, she’s our best communicator. The younger kids look up to her so much. I like to call her our ‘Mother Hen.’ She really inspires all of the kids. They see her work ethic and they feed off that.”

Doiron has been involved with the game for eight years and has picked up a lot of knowledge.

It makes her feel great to pass some of that along, especially to the younger players.

“Everyone needs to watch out, because we’ve got some young players that are going to contribute big,” she said.

Doiron started the summer off by going to a Louisiana-Lafayette camp and not long ago wrapped up with a trip to the University of Houston Camp.

“I’ve also been busy at working at getting an insurance license and be able to do that like my Mom,” she said. “I’m still leaving the door open on playing college ball as long as it is close.”

One thing for certain, the Lady Cardinals are insured when it comes to who will be setting the tone again this year.

Taryn Doiron wouldn’t have it any other way.