AND NOW YOU KNOW — Orange’s Alvin Granger jumped into canal, saved family of 5 from drowning 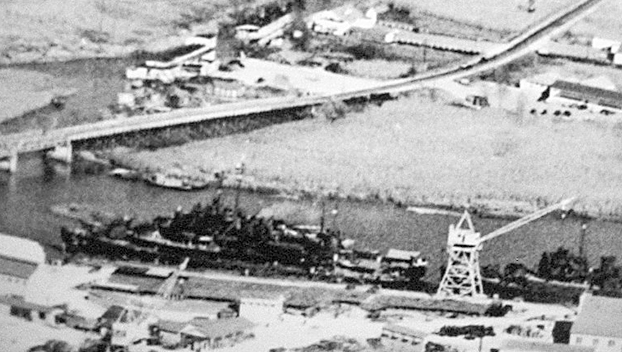 This view (date unknown) of structures at East Orange, Louisiana, looking northeast. The land in the foreground is Texas, and the other side is Louisiana. The old US 90 crossed the Sabine and proceeded eastward to the bridge, which is now the burned out bridge. (http://www.houstonfreeways.com/)

Across the river from Orange, in the area called “East Orange,” was a wooden trestle bridge called “The Mile Bridge,” because its length was about a mile.

It crossed over the canal that was dredged when the highway was built, and the steel bridge was constructed over the river at the end of Green Avenue. The canal was between six- and 12-feet deep and ran the length of the bridge on both sides.

On Dec. 29, 1938, Alvin Granger was driving with his wife and two children eastbound on the bridge when the car ahead of him came to a sudden stop to avoid a chuckhole in the wooden roadbed.

The car then went nose down into the water.

Granger instantly reacted and dove off the bridge into the water to attempt to rescue the occupants of the car. On the bridge, some men began to get ropes to drop to Granger.

Granger was able to kick the windows out on one side and rescue three adults and two children. He was able to get them out of the car and to tie them to the ropes that were lowered from the bridge.

They were then raised to safety. The worst injury was a severe blow to the head of the 6-year-old boy. The other four only had minor cuts and bruises. Granger suffered a cut to his left hand.

After rescuing the five people, he discovered they had a small dog and went back into the water and saved the dog.

Granger, an employee of Sabine Supply Company, was a modest man. His only comment was, “I did nothing more than my duty.”

Others felt different. It was recognized that had he not acted so fast that all five occupants of the car would have drowned. Word of his heroic act led to the City of Orange proclaiming him a true hero and planning suitable recognition.

Orange Mayor W. E. Lea nominated him for a Carnegie Medal for heroism. Orange planned a day to honor him, and he was invited to the state capitol at Austin to be recognized as the Texas Highway Hero of the Year.

On Jan. 4, 1939, the town turned out for the local ceremony to be held at Fifth and Front Streets.

Throughout the platitudes, Granger was slightly nervous, but maintained his “usual good-natured smile.” His wife was called to the stage to pose with him for pictures with the dignitaries.

The Lutcher Stark Boy’s Band, about 100 strong, formed an honor parade. Members of the Texas Highway Patrol, Port Arthur Motor Patrolmen, Louisiana Highway Patrol and area civic leaders formed an escort out of town as far as Pinehurst Stables for the Granger’s exit from Orange to start the trip to Austin.

In Austin, Governor James Allred read a proclamation declaring him the official Texas Highway Hero of the Year for 1939. After a tour of Austin, and a banquet and reception at the Governor’s Mansion, the Grangers returned home and resumed their quiet life.

He later worked at Levingston Shipyard and retired as the yard dispatcher.

Many who knew him, knew only the quiet, kind man that always had a smile for everyone he met. Very few realized he unhesitatingly dove off a bridge into cold water on a winter day and saved the lives of five people and their dog.

He never thought of himself as a hero, or even anyone special.

Alvin Granger just did what he thought was the right thing to do at the time. That’s what a hero does.