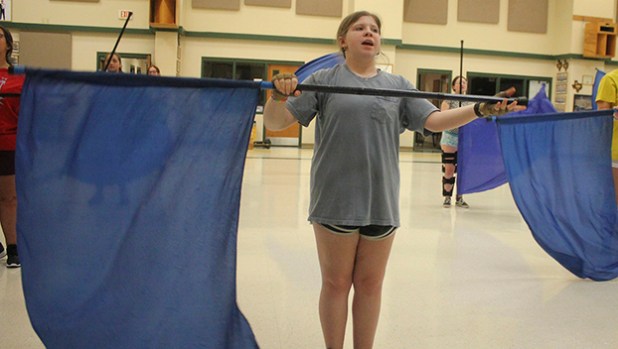 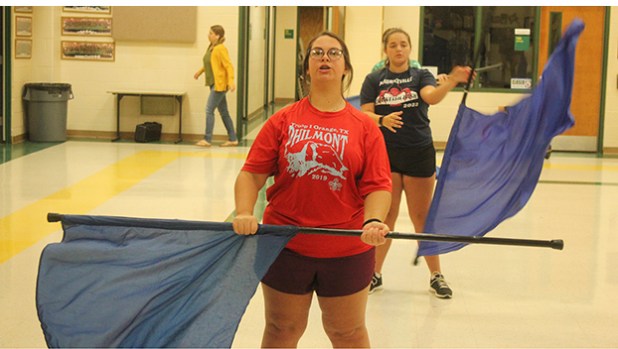 LC-M senior Color Guard member Audrey Bonnette look to have a great run in her final year with the group. (Van Wade/Orange Leader)

LITTLE CYPRESS – As the school year approaches, students are getting prepared for extracurricular activities by utilizing their summer time.

That is what the girls who participate for the Little Cypress-Mauriceville Color Guard have been doing this week.

Not only have they been working on their routines, they have been building themselves up to beat the heat as they will begin practice with the Bear Band next week in marching drills.

Captain and upcoming junior-to-be Mariska Steele loves everything that goes into being on the Flag Team.

“So much work and energy goes into it,” Steele said. “We’ve really been working hard to the music we’ll be performing too this week. We’re trying to get in sync. A lot of people don’t realize how much goes into this. It can be mentally and physically challenging. Not only does it build muscle, it builds character.”

Senior Audrey Bonnette is heading into her fourth year in flags and has loved every single moment.

“A friend talked me into it my freshman year and I fell in love with it,” said Bonnette. “I just feel I get better every year with all of the work I’ve put into it. We definitely have to stay in shape because we’re constantly moving around, dancing and marching. Then we all have to work as one unit as far as or flag movements go when we perform. We’re athletic in our own way and we have to be a team.”

Junior Lieutenant Abigayle Welch appreciates all of the work and magic that goes into the group.

“When most people see us, it is at games where we have all of the makeup on and our outfits that we wear and the flags,” said Welch. “What they don’t see is what we go through to be prepared and get ready for those performances. So much sweat and a lot of working out goes into it.”

They are all anticipating the heat that awaits them when they hit the pavement with the rest of the band members next week, working on their marching drills.

“It’s always hot around here no matter what,” said Steele. “We know how to stay hydrated and we know when to rest. We’ve kinda been there and done that and know what to expect.”

Bonnette can’t wait for it all to begin.

“I’ve always been excited about this time of year but with this being the last one for me, I’m really just pumped up about it all,” said Bonnette. “We, for the most part, stay in pretty good shape year-around by working on our drills and doing a lot of dancing and dance moves. Also, those flags may not look heavy, but when you carry them and toss them around a couple hours, it can get demanding.”

Welch anticipates that the practices will go smoothly as well.

“It’s always so much fun, and after a couple years in it, I know the pace of it,” said Welch. “There is so much energy that first day, especially for the younger ones and they get tired pretty quick. We’re going to be there to help calm them down that first day. After that, everything runs so smoothly.”

Of course, there are contests and concerts throughout the school year, but first things first, it’s all about those Football Friday Nights.

The Battlin’ Bears open the season at home Aug. 26 against Hardin-Jefferson, and the LC-M Color Guard will be ready to roll.

“There is nothing quite like those Friday night,” said Steele. “When we are not performing on the field, we’re in the stands chanting it up and dancing around. The electricity is simply like no other.”

Bonnette is giddy, as well, with the season just a little more than a month away.

“It’s always been fun at games, but last year reached a new level for us,” said Bonnette. “The football team was winning a lot of games. The student section was going nuts. The band was rocking it each and every time out. But the best part were our fans, the parents and adults. They were getting up, dancing and doing cheers and chants. It would be so awesome if we can have that again.”