Heat or not, Nic Tanner loves his Athletic Trainer duties for the Mustangs 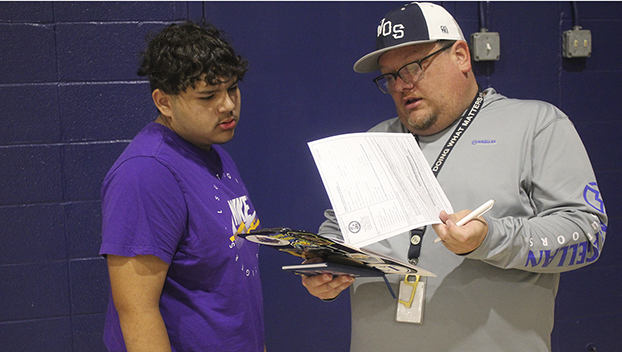 When the “Dog Days Of Summer” arrive, athletes at West Orange-Stark rely on Athletic Trainer Nic Tanner to make sure they stay hydrated and nutritionally fit.

Tanner fell in love with the business as a youngster and is heading into his 18th year as a trainer and eighth year in “taping up” the Mustangs.

The Oklahoma native found out early what he wanted to become when he was a freshman at Westmore High School.

“It was Career Day my freshman year and our high school trainer Jeff Jones introduced me to what it was like, and I just fell in love with it,” said Tanner. “I played baseball and football in junior high and I was bigger and stronger than everyone else. I began to notice that everyone was catching up with me when high school came, passing me a little athletic-wise. I could have kept on playing, but once I was hooked on athletic training, that was it. Jeff Jones, he was so awesome to me and let me work with every sport. By the time I was a senior, I made it as an All-State Trainer.”

Tanner moved on to the University of Central Oklahoma, earned his degree and was involved in all the sports and learning the needs of each individual sport.

“They broke me in good at Central Oklahoma and I loved it,” said Tanner. “I got to see a lot of really good athletes come through and got the feel of what each sport was about at the collegiate level. I also served as a graduate assistant for three years. I then realized then it was time to go to Texas. That’s where the money was at, compared to Oklahoma schools.”

Tanner’s first job was as an assistant trainer at Cypress Ridge High School. He then ventured to Port Neches-Groves and served as head trainer for eight years. He left there and went to Vidor a couple years before signing on with WO-S, where he has rode with the Mustangs ever since.

He has seen a lot of great athletes come through WO-S, and plus, there were those two State Championships he witnessed.

“I’ve been around a lot of tremendous athletes, but there is just something that sets the Mustangs apart, their work ethic,” said Tanner.

These days, Tanner is making sure the work ethic of the Mustangs keeps them healthy as the summer heat has been atrocious.

“We’re talking about the heat index being around 110 in the afternoons, so that’s why we work out so much in the mornings,” said Tanner. “The kids do stay around quite a bit outside after workouts to get acclimated to the heat a little better, but they never over do it.”

Tanner feels the Mustangs are molding into top-notch shape.

“Coach (Cory) Bell, our new Strength and Conditioning Coach, has really been pushing them all summer long and has done wonders with the kids; both boys and girls are really looking good,” said Tanner. “We’ve had such a great turnout and that’s only going to help them when their seasons start.”

Aug. 1 is when the players start working out in their gear with helmets on the first day and full pads by that weekend.

“That’s when it gets tough on them, but that’s where all of the workouts during the summer pay dividends,” explained Tanner. “When it really gets tough is when we start having those in-service days at school and practices start moving to the afternoons around 3:30 p.m. and 4 p.m. When we hit the field at those times, you don’t want to go full-board and try to do too much too quickly. It’s all about getting the proper stretching in and acclimate yourself to the conditions.”

“As long as I have been here, our coaches have always had keen eyes as far as when the kids need water breaks,” said Tanner. “Proper hydration is always key. You need to drink water before, during and after practices. Drinking water at night when they are at home is also a big plus.”

So what is one of the biggest issues Tanner sees?

“It really doesn’t have to do with water so much, it’s about nutrition,” said Tanner. “So many times, guys try to rush out here to try and be here at 8 a.m. That means they tend to forget to eat some sort of nutritional breakfast before they arrive because they are sprinting out of their houses at 7:45 a.m. to get here. We always preach to them that they need to have something in their system.”

Tanner feels he and his student trainers will always be ready on the spot when athletes need them.

“We stay busy and I’ve always been proud of my student trainers,” said Tanner. “For the most part, working at WO-S has been awesome. Our kids know how to work. It’s not just the athletes. Our band is out there in the heat today, preparing for their marches for football seasons. Our cheer team, our drill teams, they have been at it all summer. For the most part, our kids are pretty darn healthy, and my job is to help them make sure they stay that way.”