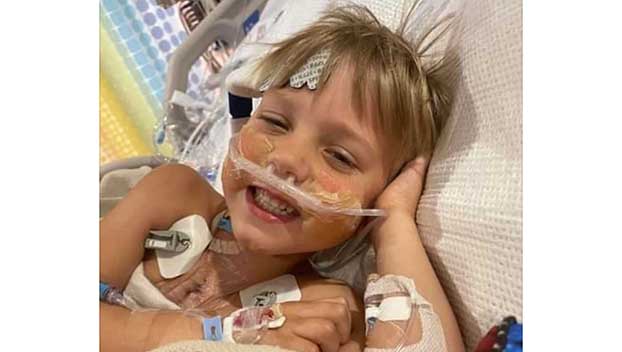 For Hannah Leger, to see her 4-year-old son sitting up playing just one week after receiving a long-awaited heart transplant, is a blessing. But it’s one that, as a mother, comes with a price.

“I’ve always been honest with myself, putting myself in the shoes of the parent that had to lose the child,” said Hannah, of Nederland. “I knew someone’s child would have to pass away and that parent would have to donate the organs for my child to live. As a mother, that’s hard. It makes you want to hug the people that had to go through the loss so that we could have a better life.”

Hannah, 27, and her husband have been at Texas Children’s Hospital in Houston since July 7, when Rhett Leger underwent a heart transplant. Born with a blockage in his heart, he’s spent his entire life under close medical supervision and 3.5 years on the transplant list.

“Basically he was controlled by medications until they could find him a heart,” said Brianna Byrd, Hannah’s friend. “(But) the medicines weren’t working as well anymore. When they got the call, they had to drop everything to get to Texas Children’s within two hours.”

Hannah said getting the call was surreal. Of the ways transplant patients are ranked, Rhett wasn’t at the top of the list.

Thursday, the small boy who just days ago was hooked to oxygen and wires participated in a scavenger hunt at the hospital. 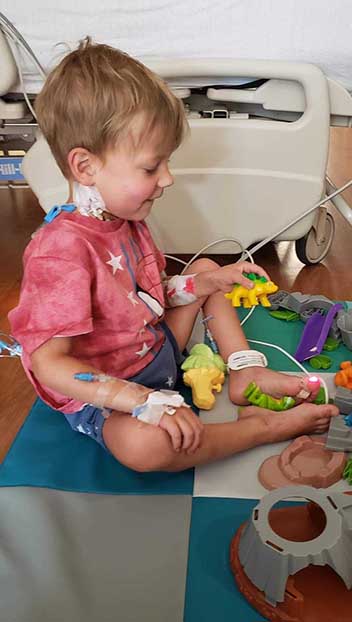 Rhett’s condition was noticed at first when Hannah was pregnant.

“I was a high risk pregnancy because of my own health issues,” she said. “They were already monitoring everything closely, and there was one time on a scan where they saw a white dot on the outside of his heart.”

In October, she went for what she thought would be a routine doctor’s appointment. Rhett’s fetal heartbeat had never been as high as other babies, but that day it had dropped into the 40s.

An emergency Cesarean section was performed.

Until he was born, doctors assumed Rhett had a partial blockage in his heart. Following his birth, they learned it wasn’t partial.

He went straight to the Neonatal Intensive Care Unit and had his first surgery in the first week of his life, where doctors inserted a temporary pacemaker. Six weeks later, a permanent pacemaker was put in.

But one of the potential side effects became a dangerous reality. Because his arteries were so small, parts of the insert cut off his blood supply.

“He turned grey and basically they had to get the rapid response team in there,” she said. “He went into emergency surgery.”

Help for the family

With the trips back and forth to Texas Children’s Hospital and knowing Rhett will spend at least five more weeks there, Brianna launched into finding fundraisers.

“We’re really trying to support them — their stay, anything they need, their medical bills. That’s our goal,” she said.

Brianna’s daughter has participated in pageants before, including those done as a benefit, so she started organizing one for the Legers.

“The K.C. Hall in Port Neches was generous enough to let us use the hall to host it, and people have offered up stuff to raffle,” she said. “The whole community feels like it’s coming together; everybody is so willing to help. It’s awesome.”

The pageant is scheduled for Sept. 17 and is open to anyone in the surrounding counties from newborn to 18, all which will be split into categories by age. While the entry fee hasn’t been determined, they will be hosting a superhero contest with a $25 entry that’s open to boys and girls.

“They reason we’re doing superheroes is because they call Rhett a super heart warrior,” she said.

For information about the pageant or donating raffle items, email Brianna at briannapfoxworth@gmail.com.

Straight donations can be made to the Legers through Venmo at @Hannah-Leger-3 and Cashapp at $BonanaMommaa.