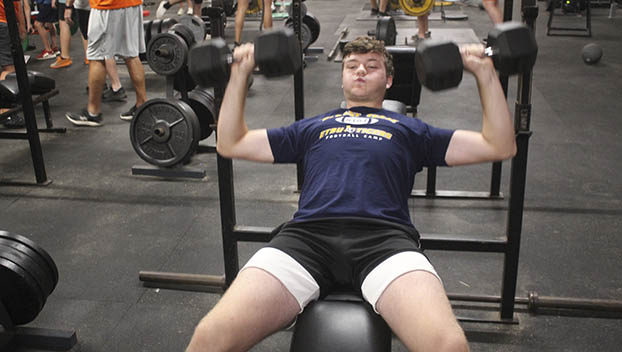 Orangefield senior Morgan Sampson goes through a workout in the Bobcat weight room as he prepares for the upcoming season. (Van Wade/Orange Leader)

ORANGEFIELD – Looking for a banner season for the Orangefield Bobcats.

That’s what senior Bobcat tight end and defensive end Morgan Sampson would love to see, suiting out for the Orange & White for the final time for long-time Bobcat head coach Josh Smalley.

A district championship banner would be something that Sampson and his fellow Bobcat seniors would love to be a part of but he knows it’s going to take some work.

Sampson was part of the last two hard-working Orangefield groups that powered their way to the playoffs at the Class 4A level.

This go-around, the Bobcats will be adjusting dropping back down to Class 3A, where they could be one of the early favorites in their new district.

“It doesn’t matter what classification we are in, we’ve proven that we can line up and play anybody tough,” said Sampson. “Playing in 4A the last couple years was challenging, because we were the smallest school in our district and we always came to play.”

The last time the Bobcats were in Class 3A, they went 9-2 and were district runnerups in 2019. Sampson saw some playing time that season on the varsity as a sophomore.

“The playing field will be more level for us again as far as numbers,” said Sampson. “But we also know that we will be the ‘big guys’ on the block again with us having the biggest numbers now and everybody we play is going to get after us and we’re going to have to be ready. East Chambers, Woodville, Anahuac and Buna – we know what they are all about. They have a lot of really good athletes.”

Sampson will look to provide leadership on both sides of the ball from his tight end spot, in which he made First Team All-District and First Team All-Orange Leader, and at defensive end.

“I know I’m going to step in and help lead the way because we are replacing a lot of starters, especially on the offensive line,” said Sampson. “The best thing so far, is the young guys that will be playing on the line have been up here during the summer working really hard every day. They are all getting stronger, now it’s mostly about them to trying to pick up the knowledge and getting their techniques down, which I know they will.”

“Morgan knows what it is all about,” said Pachuca. “He knows the ins and outs of the offense and he’s very vocal with the younger kids explaining their positions and what they need to look for. He’s big, strong and very athletic and is a smart kid. He’s just a kid that any coach out there would love to coach.”

In the Slot-T offense the Bobcats run, the tight end has to be a stout blocker, which Sampson is. However, Sampson made some critical catches in the offense last season that kept drives moving that led to scores.

“Being a tight end in this offense is fun and there are some responsibilities with it too,” said Sampson. “I have to make sure the line is lined up properly and I look over the defense to see if we need to possibly change some things up at the line of scrimmage. Then I also have to play kinda like a split end at times on routes. After last year, I really feel comfortable that I can make some more big plays.”

Sampson is ready to get more snaps at defensive end.

“I’m looking forward to it, being able to rush the passer and get after it,” said Sampson. “I know I’m going to be playing even more this year, so I’ve really been working extra hard all summer long.”

“No doubt, Morgan is going to be on the field a lot longer this year and we expect him to do well at the end spot,” said Pachuca. ‘Morgan and Koen Maddox will be nice bookends on the defensive front. He’s just a great asset to the team.”

Sampson has also had a tremendous role model to look up to. His brother Mason Sampson graduated a couple seasons ago and was also an All-District tight end and played on the defensive front as well.

“I kinda know what everything is about, watching Mason go through it and it was awesome to play some games with him when I was a sophomore and he was a senior,” Sampson said. “He could be tough on me and rub my face in the dirt at times, but I love him and I have always looked up to him.”

Sampson likes the Bobcats’ chances for sure as they head into the football season.

“Around here we always like to say ‘We Believe’ as far as being a part of the Bobcat Family,” said Sampson. “Coach Smalley also has a saying that I love though. He calls it ‘TPO’, which means ‘Tough People Only.’ That mentality means that no one is going to out work us or out battle us. The only way that teams should beat us is them being just simply better than us talent wise. One thing for sure, playing for Orangefield, we want our opponents to remember the battle. I think we have a great chance at doing some great things this year as long as we stay strong and keep that mental focus.”