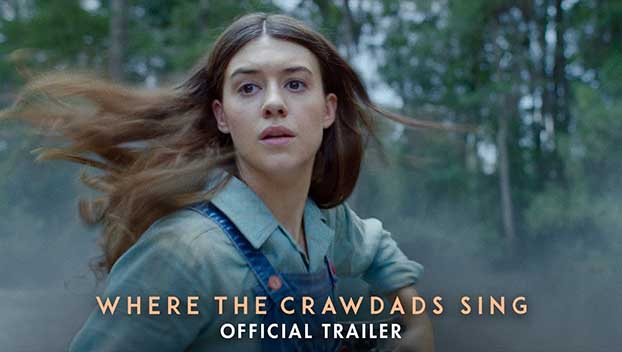 Delia Owen’s 2018 novel, “Where the Crawdads Sing” spent 157 weeks on the New York Times Best Seller list. It has millions of ardent fans—I count myself among their numbers. It should come as no surprise that I was very excited to see the movie adaptation, which hits theaters this weekend.

Perhaps my expectations were too high, but I was quite disappointed. This movie is a pale imitation of the book, dutifully hitting the major plot points, but completely missing the spirit of the novel. I imagine that fans might enjoy reliving the story, but non-fans will leave the theater wondering what all the fuss was about.

The fuss should be about Kya, a young girl who was abandoned by her family and left to raise herself out in the middle of the North Carolina swamplands. She refuses to go to school, preferring to study nature instead. Daisy Edgar-Jones plays Kya when she grows up a bit, and she enjoys an idyllic-but-feral existence right up until the point where two young men show up, panting at her door (Taylor John Smith and Harris Dickenson).

They both say that they love her, but one of them ends up dead, and Kya the “Swamp Girl” is put on trial for murder.

The movie makes a business choice in casting Edgar-Jones in the leading role. The British actress is a rising star, and she is certainly talented, but she is also so pale-skinned and sports such beautiful, non-frizzy hair that’s it’s difficult to imagine her having spent a single day out in the wilderness, let alone her entire life. You would never look at her and think, oh yeah, that’s a swamp girl.

You would also never look at the two young men in her life and think that they were anything more than good looking-but-bland actors straight out of central casting. They represent the twin allures of true love and dangerous lust in the novel, but that never really comes across in this film. It’s hard to buy into the mystery behind the murder when you’re not invested in these unremarkable characters.

The other major character in this story is the North Carolina wilderness, which is quite memorable in this movie. Shot in Louisiana, there are plenty of opportunities to sit back and gawk at the gorgeous nature filling the screen. Kya becomes an acclaimed naturalist in the novels, and thanks to the cinematography and location scouting, her drive is absolutely understandable in this movie.

Adapting a beloved novel for the big screen is never an easy task. You must pare the story down and still manage to bring the characters and setting to life. The best movie adaptations find a way to balance the plot with the ineffable experience of reading the book. Pedestrian adaptations, such as “Where the Crawdads Sing,” hit the main story moments but miss the magic behind the characters.

All of which leaves fans, like me, feeling very disappointed by the effort.