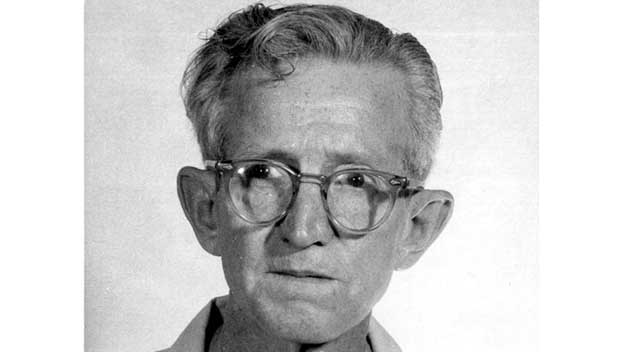 “If an obscure Florida convict named Clarence Earl Gideon had not sat down in prison with a pencil and paper to write a letter to the Supreme Court; and if the Supreme Court had not taken the trouble to look at the merits in that one crude petition among all the bundles of mail it must receive every day, the vast machinery of American law would have gone on functioning undisturbed.

“But Gideon did write that letter; the court did look into his case; he was re-tried with the help of competent defense counsel; found not guilty and released from prison after two years of punishment for a crime he did not commit. And the whole course of legal history has been changed,” said Robert F. Kennedy in 1963.

After a lifetime of incarceration for petty crimes, mostly burglary and theft, the nearly penniless man, Clarence Earl Gideon, drifted into Orange in 1950. He met and married a woman named Thelma Kurtz.

On July 7, 1951 Gideon was arrested for the crime of breaking into a private home with intent to commit theft. When he was taken into court, he was asked if he needed counsel, he replied, “no.” Ten years later there would be a change in his answer.

Gideon received a short sentence and returned to Orange. He and Kurtz divorced in 1955.

Gideon sold Smitty’s Bar and worked on tug boats around Orange. He and his wife divorced and he drifted away from Orange.

In 1961, he was arrested for breaking into the Bar Harbor Poolroom in Panama City, Fla. When he was taken to court, he asked for an attorney. The judge told him that court-appointed attorneys were only given to defendants in capital cases.

Gideon stated he was innocent and too poor to afford an attorney, and he was entitled to counsel under the U.S. Constitution. His request was denied.

He was tried and acted as his own attorney. Gideon was found guilty and given a five-year sentence in the Florida State Penitentiary. In prison he began to do research and found he was entitled to legal representation under the 6th Amendment (right to counsel) and 14th Amendment (due process).

He gathered up his research materials and wrote an appeal in pencil on prison stationary, requesting a review of his case. He addressed it to the United States Supreme Court. The Court received his request Jan. 6, 1962.

After reading his request, they requested records from the Florida courts and discovered the judge in Gideon’s case indeed refused him counsel and Gideon had filed an appeal to the Florida Supreme Court, which had upheld the lower court.

Abe Fortas, who was destined to become a Supreme Court Judge himself, was appointed as the attorney for Gideon. Fortas presented a “brilliant appeal.” The vote of the Court was unanimous in favor of Gideon.

As a result of a penciled appeal to the U.S. Supreme Court, thousands of prisoners in Florida were released from prison after it was found their rights to counsel had been denied. Gideon, however, was not released.

He had to undergo a second trial. With competent counsel, it was proved he was innocent of the crime he had been accused of and he was found not guilty and set free.

He resumed his life of doing odd jobs, he married again. On Jan. 18, 1972, he died of cancer in the Broward Medical Center, Ft. Lauderdale, Florida at the age of 61.

Anthony Lewis discovered the story of Gideon and his appeal and wrote a book “Gideon’s Trumpet.” The title was a play on words based on the biblical story of Gideon blowing the trumpet and causing devastation.

A Hallmark TV movie of the same title was made in 1980 based on the book and starring Henry Fonda as Gideon.

Gideon v. Wainwright is a landmark decision by the Supreme Court that changed jurisprudence in America. The decision of March 18, 1963 made the fundamental right to counsel binding on all states and essential for fair trial and due process.

Clarence Earl Gideon was a nearly illiterate, mostly penniless petty criminal. He was meek in appearance and at the age of 47 was said to look as though he was in his late 60s.

His courage and tenacity in appealing to the High Court had the most effect on personal rights of any case filed in the 20th Century.