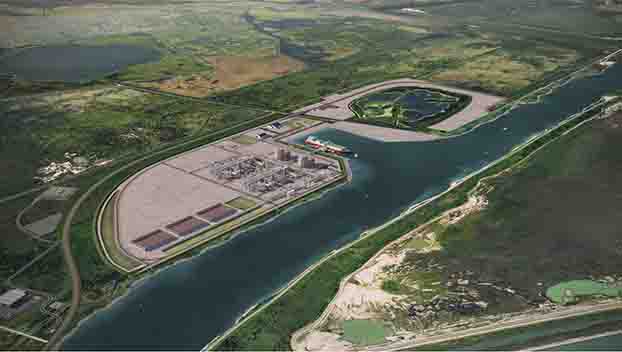 Port Arthur LNG released this rendering of its Jefferson County project, which has the potential to become one of the largest LNG export projects in North America.

Today’s announcement marks an important milestone with the substantial completion of the marketing phase of Phase 1 of the Port Arthur LNG project.

The referenced agreement anticipates the negotiation of a definitive agreement for a 20-year liquefied natural gas tolling arrangement for 5 million tons per annum at Phase 1 of the Port Arthur LNG project under development in Jefferson County.

The agreement also contemplates a 30 percent equity investment in Phase 1 of Port Arthur LNG by ConocoPhillips and the potential for ConocoPhillips to supply additional natural gas to the proposed facility, including responsibly sourced natural gas, for the project’s other LNG sales.

In addition to the provisions related to Phase 1 of the project, ConocoPhillips would have the option to acquire certain LNG offtake and equity ownership from future developments of the Port Arthur LNG site, which may include additional LNG trains as well as low-carbon hydrogen infrastructure.

“At Sempra, we believe bold new partnerships will be central to solving the world’s energy security and decarbonization challenges,” said Jeffrey W. Martin, chairman and chief executive officer of Sempra.

“That is why we are excited to announce this proposed partnership with ConocoPhillips, a leading global energy producer that also shares our vision of responsibly developing and delivering cleaner energy resources.”

Phase 1 of the Port Arthur LNG project is permitted. The project is expected to include two natural gas liquefaction trains and LNG storage tanks, as well as associated facilities capable of producing, under optimal conditions, up to approximately 13.5 Mtpa of LNG.

Sempra Infrastructure and Bechtel are working on updating the terms of the project’s fixed-price engineering, procurement and construction contract that was previously announced in 2020. A similarly sized Phase 2 project is also under active marketing and development.

Additionally, the agreement provides for collaboration between the two companies for LNG offtake, natural gas supply and equity investment for Phase 2 of the ECA LNG export development project in Baja California, Mexico, including up to one-third of the exported LNG volumes.

The referenced agreement is a preliminary, non-binding arrangement, and the development of Sempra Infrastructure’s LNG projects remains subject to a number of risks and uncertainties, including reaching definitive agreements, securing all necessary permits, signing engineering and construction contracts, obtaining financing and incentives and reaching a final investment decision for each project.

Ryan Lance, chairman and chief executive officer of ConocoPhillips, said the decision to enter into this agreement with Sempra provides a ground-floor opportunity to participate in premier LNG developments, reinforcing a commitment to helping solve the world’s energy supply needs.

It’s part of a transition to a lower carbon future.

“Sempra brings a long history of successful LNG project development, and we look forward to working together to provide reliable LNG to support the energy transition and strengthen U.S. and global energy security,” Lance said.

Sempra Infrastructure would also have the opportunity to participate in carbon capture and sequestration projects developed by ConocoPhillips in Texas or Louisiana in connection with the Port Arthur LNG project.