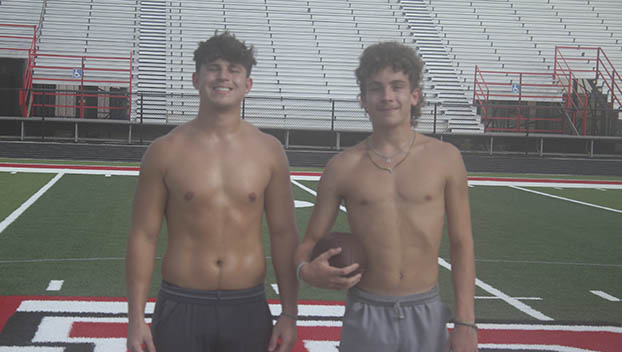 BRIDGE CITY – They don’t have an “axe to grind” going into the 2022 Bridge City football campaign.

Let’s just say that Bridge City seniors Mason Pruitt and Cale Breaux have points to prove and are ready to leave a major impression on the field for second-year Athletic Director and head football coach Cody McGuire.

Pruitt had a stellar season at middle linebacker last season as a junior for the Cardinals. To make 154 tackles was quite an accomplishment in his first year on the varsity, which usually gets you some top-notch honors. However, Pruitt only made Honorable Mention on the All-District Team.

For Breaux, the 2021 season was a tough experience. After seeing time late on the varsity as a sophomore, Breaux entered last year looking to produce at defensive back and receiver. That unfortunately fell through as he suffered a season-ending knee injury against Buna in the season opener.

Now, Pruitt and Breaux are on a mission to be the best they can be when the Cardinals suit up for real on the last Friday in August.

“Last season, I really felt I made a mark on defense,” said Pruitt. “I really charged the ball and was able to chase people down. I thought 154 tackles was a pretty good year. Maybe I need 200 to make the All-District Team. 200 tackles is definitely my goal. Anything I can do to help out this team, I’m going to do it. Our job on defense is to get off the field as quickly as possible and let our offense go after it.”

Breaux has bounced back amazingly well from his knee injury.

“I hurt it in practice that week we played Buna and I thought it was going to be OK, but then it tore in the first game, and that was so frustrating,” said Breaux. “It was so frustrating because I wanted to be out there with the guys. I knew I wanted to bounce back as soon as I could because I want to go out with a great senior year. After about eight months of rehabbing it and working out, I’m back to normal, though I do wear the brace for cautionary reasons.”

One thing for sure, Pruitt is elated to have Breaux back at full strength.

“Cale gives us so much on both sides of the ball,” said Pruitt. “He can stick to you like glue in the secondary and he’s hard to get by. On offense, he has great hands and is such a weapon there, too. With everything he went through to get back, that has helped motivate me even more.”

The Cardinals were definitely on the upswing last season, improving to four wins after just winning one game in 2020.

“It was a learning process with Coach McGuire last season, and he came in here and really boosted our confidence,” said Pruitt. “He really pushes us, believes in us and is always up here working hard. He sets a really good example with the way he goes about things, and we follow his lead. We’ve had a full offseason now with what he expects of us, and it has been awesome and so has the turnout this summer.”

“Coach McGuire pushes us hard, and we have been so organized this summer and the turnout has been great,” said Breaux. “What’s really awesome about him is that he stresses the importance of being good guys on and off the field and sets goals for us on an off the field.”

The Cardinals have enjoyed a great turnout through the summer, and Pruitt and Breaux gladly accept leadership roles.

“As a senior, you have to set the tone for the younger guys and they really look up to us,” said Pruitt. “I was in their shoes once, so I know how they feel. You just have to push them in a positive direction and they’ve really done that this summer.”

“It’s just great to be back with everyone and I love working with the younger guys because they just feed off what you do,” said Breaux. “I love it when they ask us questions, and they have a lot of them. I’m always glad to help them in any way possible. It’s all about being part of a team.”

The Cardinals will officially crank up their season Aug. 26 when they visit the Orangefield Bobcats.

“Last season, we showed that we could improve as long as we all worked together,” said Pruitt. “This year, the goal is to get in the playoffs, win a district title and be the first group to get Coach McGuire in the playoffs for the first time as a head coach.”

“We are definitely pushing towards making the playoffs,” said Breaux. “As a senior group, we all really want to make a mark and be a class to be remembered. I’m just thrilled to be back and ready to hit the field again for that first game.”