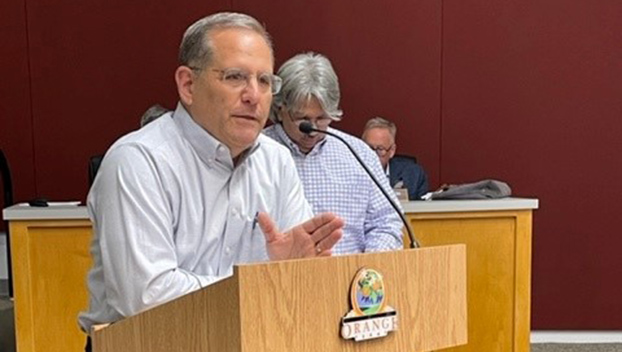 Enrique Villagomez from Corps reviewed the project for the council.

His talk was also shared with the public during open house meetings in April.

In the case of the Riverfront Pavilion, the levee design was altered to preserve the structure.

Terrie Salter Turner of District 3 sought clarity for community members on what internal protection the system will offer.

The levee is part of a bigger project and extends from Sabine Pass to Galveston. Although the purpose of the levee is to protect life and property along the Texas coast against storm surges from the Gulf of Mexico, the council was assured it would work with existing drainage systems to protect the city internally from rain events that cause Toledo Bend spillway gate openings.

Judge John Gothia weighed in on several issues of concern related to the levee project.

Based on his discussions with FEMA, he believes the completion of the levee, or Flood Diversion and Storage system (FDS), may trigger lower flood insurance rates for Orange County.

His comments detailed support for the levee and concerns for community impact.

“This project is historic, and we are extremely fortunate, especially in today’s environment,” he said. “We know how important it is for our residents and community. We don’t want to keep losing our citizens due to storm surges that we can’t control.”

According to Dr. Kelly Burks-Copes of the Corps, a virtual town hall meeting will be held by year-end to complement the April open houses.

Citizens will have an opportunity to hear about the project and ask questions.