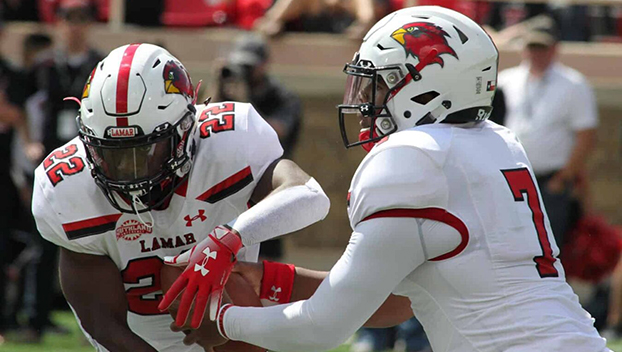 Lamar sports will make a friendly return back to the Southland Conference after participating in the WAC Conference last season. (Leader file photo)

BEAUMONT – After accepting an invitation to return to the Southland Conference in April, Lamar University has announced an early transition back to the league. Effective immediately, LU will officially be a full-fledged member of the league competing in 17 varsity sports. The decision to make the early move comes upon the heels of Jeff O’Malley joining the university as the new Director of Athletics on July 1.

“We are very excited to take advantage of this opportunity to make the move to the Southland Conference for the 2022-23 season for all sports,” O’Malley said. “This is the best fit for the future of Lamar University Athletics, our fans and our student-athletes. I would like to thank Commissioner Grant and the leadership of the conference for working with us and providing a chance to join the league immediately.”

Established in 1963, the Southland Conference holds nearly 60 years of competitive success and encompasses nine league institutions across Texas and Louisiana, more than 140,000 current students and an alumni base of nearly 900,000. LU originally joined the league in 1963 and, after a brief departure, rejoined the Southland in 1999. Cardinal fans enjoyed five decades of success in the Southland Conference. During LU’s time in the conference, fans witnessed 109 regular-season championships across the university’s 17 varsity sports.

This is an exciting time for Lamar University Athletics, and I am thankful for the support of Commissioner Grant on this careful decision to make the early move back to the Southland Conference,” said Lamar University President Jaime Taylor.

Seven months after announcing its intent on exiting the Southland Conference Incarnate Word has had a change of heart.

The San Antonio school won’t be heading west, instead cutting a deal with league officials to stay put in the SLC.

“This is huge for us,” said Grant. “It shows the hard work of our board, of our athletic directors and people in the Southland.

“Incarnate Word has been a great partner for us and we are more than excited to have them staying. It shows that our brand is getting stronger.”

The Cardinals are expected to play a full Southland schedule, including football, this season. UIW is the defending SLC football champs, claiming the program’s first title last fall with a 7-1 record. It’s only loss was in Lake Charles to McNeese State.

Grant had previously said the league had plans in place if the Cardinals decided to stay.

“We are working on finalizing those right now,” Grant said. “We want to make the least amount of changes necessary for our teams, players and fans.”