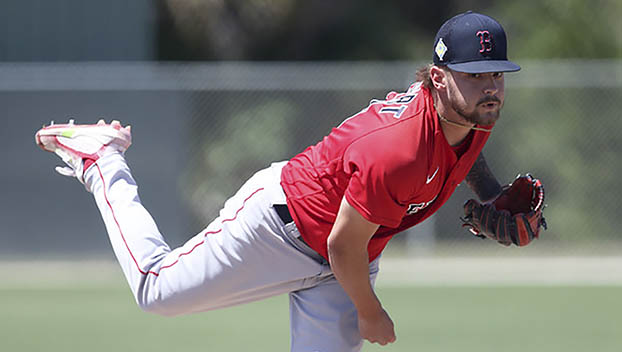 Former Bridge City and University of Texas standout pitcher Chase Shugart keeps moving up the ranks, being called up to Triple A ball by the Boston Red Sox and is playing for Worchester.

In his first relief appearance, Shugart tossed three innings, giving up one run on just one hit while striking out two. He retired the first seven batters he faced at the Triple A level.

In his second outing, Shugart tossed an inning, allowing one hit with a strikeout and allowing no runs.

Shugart began his season at Double A Portland. He posted a 2-2 record with a 3.77 earned run average. He notched 34 strikeouts and 10 walks in 31 innings of action.

Shugart was drafted in the 12th round by the Red Sox in the 2018 Major League Draft.

Shugart was a two-way athlete in high school, playing football and baseball. He also showed plenty of skills laying quarterback for the Cardinal football team.

“Going into high school and getting recruited (for baseball), that’s when I realized this is a real possibility, I can make a future out of this,” said Shugart.

The standout former Cardinals ace continued to flash his potential during his high school career, ultimately making the decision to commit to the University of Texas at Austin and play college ball for the Longhorns.

Shugart was initially recruited as a two-way player, having played left field and first base along with pitching out of the bullpen. Once he joined the Longhorns, he became a full-time pitcher.

Growing up an hour and a half outside of Houston, Shugart noted he had always been an Astros fan, but he enjoyed the Red Sox a great deal, as well. Discovering his fondness of the Red Sox at a young age, he looked up to Mike Lowell because he “liked the way he went about his business.”

As for the mound, the young pitcher looked up to fellow Longhorn and Red Sox alum Roger Clemens and had the opportunity to build a close relationship with the former pitcher while playing with his two sons in college.

While the elder Clemens was not a coach for the Longhorns, the multi-time Cy Young Award winner would occasionally step up and give the team words of wisdom when necessary.

“He didn’t want to overstep the coaches,” Shugart said. “When the pitching staff wasn’t as good as it should be, Roger would come into the conference room at the hotel and tell us that if you didn’t have the talent you wouldn’t be at Texas.”

Going into his third year at Texas, Shugart was at practice preparing for the 2018 Super Regionals when he was told he had been drafted. He took a call from his regional scout outside when he returned to the locker room to be greeted by his entire team breaking the news to him in excitement.

A junior at the time, he described hearing the news as a mind-out-of-body experience.

“It was like, alright, I’m playing professional baseball after this,” he said.

The Longhorns ultimately lost in the finals to the Arkansas Razorbacks, but Shugart never looked back, forgoing his senior year of college to make the jump to professional baseball. The right-hander was ready to “hop on the horse and get going.”

Shugart was able to see some action after being drafted in 2018, splitting time between the Rookie League and Low-A. In 2019, he earned a full season of work in Greenville, throwing 89.2 innings over 16 games to the tune of a 2.81 ERA. The guidance from Greenville coach Bob Kipper helped him in ways he didn’t think he needed to improve in.

Shugart spent time focusing on the mental aspect of the game. He knew when he had a poor outing it was because he was trying to do too much. The farmhand spoke of the time he spent visualizing the work he had to put in to get to the big leagues.

“I would go through at-bats in my head in Greenville or watch some tape,” Shugart said. “I would wonder, what was I thinking there, why was I so good that day? Why was I so bad that day?”

Shugart had a busy offseason to prepare for what was ahead this summer as he looked to grow as a reliever in the Red Sox organization.

Shugart was one of several Red Sox minor-leaguers who spent part of their off-season playing winter ball outside of the United States.

Suiting up for Indios de Mayaguez of the Puerto Rican Winter League, Shugart posted a 2.84 ERA and 1.11 WHIP with nine strikeouts to two walks over five relief appearances, spanning 6 1/3 innings of work during the regular season.

In the postseason, Shugart’s star shined even brighter. The right-handed pitching prospect allowed one run on five hits, two walks, and nine strikeouts across six outings (6 1/3 innings pitched) out of the bullpen for Mayaguez. That’s good for an ERA of 1.42.

Prior to making the trek to Puerto Rico in December, Shugart had only been used as a starter since being drafted.

To begin his career at Texas, the Bridge City native pitched out of the bullpen during his freshman and sophomore seasons before moving to the Longhorns’ starting rotation in 2018.

Shugart could fill any role, but Red Sox Director of Player Development Brian Abraham likes what he brings as a reliever.

“I think there’s still an opportunity to start, but I think ultimately we see him more as a bulk reliever type role,” Abraham said of Shugart. “He had a lot of success in Puerto Rico in the short amount of time he had down there. It was a really good experience for him based on the conversations we had with him today.”