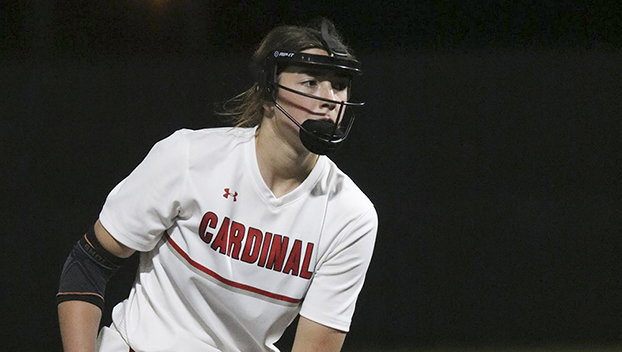 “It’s such an awesome honor, but it couldn’t have happened without all of the great teammates I have,” said Fall. “The season was just so awesome all the way around. We had everything working for us, and to go undefeated in our district, which is always so strong, was extra special.”

Fall was the key part of the arsenal that made the Lady Cardinals go this season as they strolled to a 27-7 mark for head coach Raven Harris. And then there was that perfect 12-0 run to win the District 22-4A Championship. Bridge City ended up in the third round of the postseason, giving defending state champion Liberty fits before falling 2-1 in a decisive Game Three in the 4A Region III Quarterfinals.

Fall was also the Most Valuable Player on the All-District 22-4A Tem and the All-Orange Leader Team.

She notched a 23-3 record. She tossed 165 1/3 innings and finished with a 0.55 earned run average. She allowed just 55 hits and posted a whopping 372 strikeouts. She amassed 16 shutouts that included two perfect games and nine no-hitters. She also hit .323 at the plate with three home runs and 14 runs batted in.

Fall had so many huge moments shutting opposing lineups down, but she has a couple big memories that stick out.

“The Game One win against Liberty was so big. We realized then that we could compete with them and that we had the talent to beat anybody,” Fall said. “We had a little bad luck in the last game of that series, but that only made us want to work harder and come back bigger and better next year.”

The Lady Cardinals downed Liberty 4-0 in Game One of the series as Fall allowed just two hits and fanned 14 in the shutout.

The other moment came when the Lady Cardinals and Fall bested Lumberton in the district finale 2-1 in 10 innings. Fall notched 20 strikeouts in the 10 frames.

“That game was crazy and it was the loudest game ever with all the fan support we had at home that night,” Fall said. “We were wanting to go 12-0 in district so bad and we got it done.”

Fall is having a busy summer between travel select ball and Crossfit training.

“I like staying busy in the summer and I have to keep trying ways to improve my game,” Fall said. “I know it’s a busy schedule but I wouldn’t do it if it wasn’t so much fun. I just love the game.”

Fall can’t wait to next season either as the Lady Cardinals return six players to the starting lineup.

“We definitely feel we are building something special, and we also know that we all want to improve our games because everyone will be trying to beat us after the season we had last season,” Fall said. “We would love to go undefeated in district, again, and get further in the playoffs. This season we proved to ourselves we could do it. Next year, it’s all about knowing we can do it. I can’t wait to see what we can do, for sure.”

Kountze third baseman Emily Smith made Honorable Mention on the 3A Team.