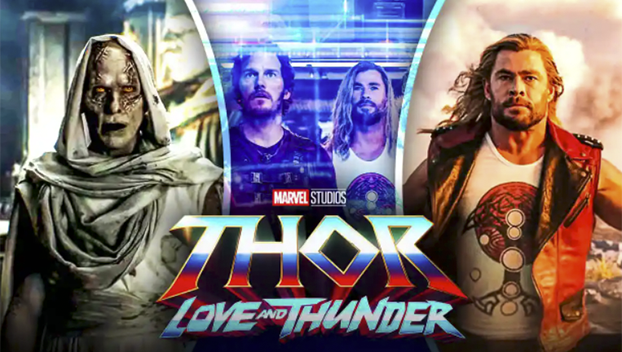 Marvel Studios have never had a problem with dropping a joke or two into their movies.

Unlike their counterparts over at DC, the Marvel filmmakers know that a little levity goes a long way in making the preposterous plots of these comic book movies easier to swallow.

This was never more apparent than in 2017’s “Thor: Ragnarok,” which brought a delightfully silly tone to a tale that dealt with nothing less than the Norse apocalypse.

Credit the success of that movie to star Chris Hemsworth’s willingness to poke fun at his over-buffed persona, and to director Taika Waititi’s off-kilter sensibilities.

I absolutely had a blast watching “Thor: Ragnarok.” So, as you might imagine, I was really looking forward to seeing the sequel, “Thor: Love and Thunder,” which is once again helmed by Waititi.

Perhaps I was expecting a little too much, but this latest “Thor” isn’t quite as much fun as the last adventure. Don’t get me wrong, I still had a blast watching the film and enjoyed the comic moments that are peppered liberally into the story.

The problem is the film also deals with some very serious issues, and there’s a bit of tonal whiplash as the film moves from comedy to drama.

The movie begins with the God of Thunder palling around the universe with his Guardians of the Galaxy friends. He is spurred into action when an intergalactic entity known as Gorr the God Butcher (Christian Bale) starts hunting deities across the universe.

It’s no surprise Thor would take on this challenge. The surprise comes when he sees his old girlfriend, Jane (Natalie Portman) and finds she has been transformed in something of a Goddess of Thunder.

Thor claims to be happy with his new axe, Stormbreaker, but he clearly has unresolved feelings for his old weapon. It’s a delightfully silly love quadrangle, where two of the players aren’t even human.

Lest there be too much levity, the filmmakers add Christian Bale into the story. He makes Gorr into a deadly serious villain who is so single-mindedly bent on destruction that he sucks much of the energy (and the color) out of the film.

He’s an angry, all-powerful bad guy who wants revenge on the gods who allowed his daughter to die. I understand the father’s motive behind this character but question if it belongs in what was set up as a fun little intergalactic adventure.

More seriousness sneaks in when Jane is forced to make some life-and-death decisions of her own. Ultimately, it makes the movie much bleaker in the end.

I suspect that there will be many fans who will enjoy this tone. For my part, I was hoping for something less ponderous.

I did still enjoy the movie; mood shifts and all. I loved the pop music needle drops, the surprise cameo appearances by famous actors, reuniting with fan-favorite supporting characters like Korg and Valkyrie, and Hemsworth’s underappreciated comic acting abilities.

“Thor: Love and Thunder” is a lot of fun. I just wish it had stayed fun throughout the whole movie instead of trying to unsuccessfully meld two very different movies into one uneven, tonal mashup of a movie.