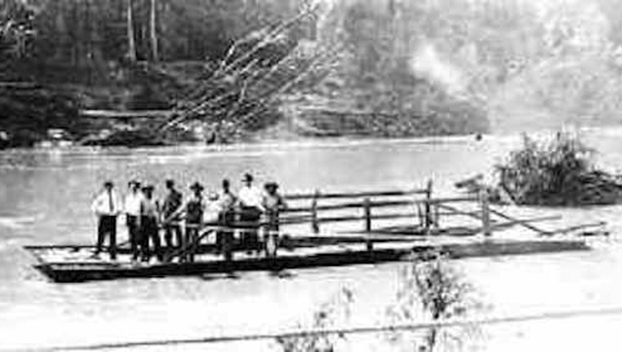 wesferguson.net reports this is a photo of a Sabine River ferry taken in 1916.

Entrance into and exit from Orange County is simple today because of bridges.

In the 19th Century, it was not that simple. A traveler either swam the rivers and bayous or crossed on a ferry.

The ferry on the Sabine River north of Orange was operated by Richard Ballew, who had been one of Jean Laffite’s pirate crewmen. When Ballew decided to leave Laffite, he obtained a land grant from the Mexican government.

Ballew had been operating the ferry for a number of years when the Jefferson County Commissioners Court began regulation of ferries. Orange County was part of Jefferson County at that time.

On July 3, 1837, the court granted a license to R. Ballue (sp) to operate a ferry across the Sabine River:  “the petition of R. Ballue (sp) praying to have a licensed ferry on the Sabine, which was granted and said Ballue (sp) required to give bond and security for keeping good boats and the banks on each side of the river in good condition……..giving his bond for one thousand dollars with James Jett as security.”

To the Bluff: man and horse with pack (each) $2 when there is but one, but when more than one then he shall charge but $1.50; led horses half the above rates, 75 cents; wagons and teams to the Bluff, $1 per wheel; foot passengers to the Bluff 50 cents.

For keeping up a pen, furnishing boats and three hands for crossing cattle he shall receive 2 cents per head.”

Records show that Ballew had been operating his ferry as early as 1832. His name is also found on the 1840 Jefferson County poll and tax records, where he claimed to hold title to 4,428 acres and an additional 2,214 under survey. His other possessions were listed as: “25 cattle, seven horses, a brass clock, a gold watch and one two-wheel carriage.”

It is not known when Ballew gave up operation of the ferry or when the old pirate died. In June, 1850 the Jefferson County Commissioners Court granted a license to operate the ferry to A.R. Jones.

Jones only operated the ferry a short time.

Ursan Guidry succeeded Jones as operator of the ferry. Guidry had problems proving ownership of the land. He petitioned the court for operation of the ferry on June 3, 1851, but it was not until Nov. 17, 1851, before the court finally granted his petition. Guidry had to post a security bond of $1,000 for a 12-month license.

In February, 1852, Orange County was created and Guidry had to apply for a petition to the newly created Orange County Commissioner’s Court. He was granted a license for 12 months with the posting of a $2,000 security bond.

He was ordered to “pay the county treasurer the sum of $25 as a tax imposed by the court agreeable to the Legislature regulating ferries passed on January 23, 1850.

Guidry was also ordered to “keep good pens on the west bank of the river for swimming horses, cattle, and etc., and set his rates the same as those he had been charging.”

His license was renewed each year at the same rate of bond and tax on condition that he kept the roads leading from his house to the ferry in good condition. In 1857 his renewal gave him a reduced tax from $25 to $15.

There were several other operators of the old Ballew’s Ferry until the railroad crossed the river and the line went to Orange. Following the railroad there was a road built through the marsh across from Orange and a ferry began to operate from the foot of Elm Street to the east bank of the river.

In 1927 the steel bridge was opened to cross the river at Green Avenue. This road became Highway 90, the route between Houston and New Orleans. There was no longer a need for the Sabine River ferries.

In 1936 the high steel bridge between Bridge City and Port Arthur was put into service and the Dryden Ferry across the Neches River and Sabine Lake was taken out of service. Bridges had been built across Cow Bayou and Adams Bayou. Ferry operations had become a part of history.