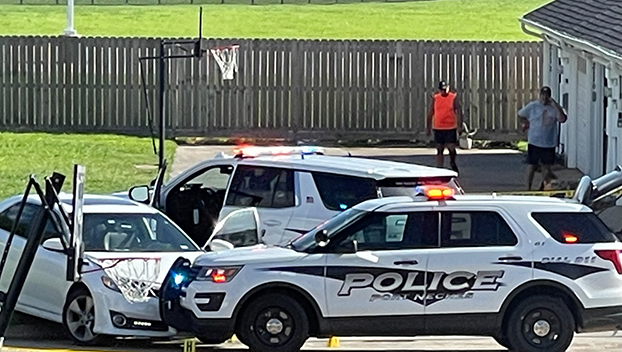 PNPD patrol cars are seen at the scene of an officer-involved shooting on Merriman Street Tuesday morning in Port Neches. (Monique Batson/The Leader)

PORT NECHES — The names of the two Port Neches police officers involved in the fatal shooting of a 21-year-old man earlier this week have been released.

They are officers Guy Reynolds, 59, and Andrew Carter, 39, according to Port Neches Police Chief Paul Lemoine.

Reynolds has a total of 31 years of service as an officer, 13 with Port Neches and 18 with Port Arthur.

Carter has 3 years and 9 months with Port Neches and 11 with The Port Arthur Police Department.

The men are on paid administrative leave pending investigation.

Lemoine said the officers will undergo full psychological evaluations and provide information for the investigation, which is being handled by the Texas Rangers.

The Texas Rangers, a division of the Texas Department of Public Safety, is investigating the shooting at the request of Port Neches Police Department.

Port Arthur Newsmedia reached out to the Rangers seeking comment. An emailed response from DPS said, when completed, the investigation will be submitted to the Jefferson County District Attorney’s Office.

“This is an active investigation; additional inquiries should be referred to the District Attorney’s Office,” said Shana Clark, media communications with Southeast Texas Region of Texas Department of Public Safety.

Trevon Hull, 21, of Port Arthur was shot and killed by two Port Neches police officers after he allegedly rammed a stolen vehicle into a police unit before fleeing on foot with a gun.

The preliminary autopsy findings released Friday indicate Hull suffered multiple gunshot wounds. However, the amount of wounds and where they were located were not made public.

Officials also indicated toxicology tests were performed, and those results will take several weeks to confirm. The investigation is continuing.

The full autopsy will take up to 90 days, officials said.

The autopsy on Hull was performed Thursday by Forensic Medical of Texas in Beaumont and was ordered by Brad Burnett, Justice of the Peace Pct.7.

When the investigation is completed, the findings will be submitted to the District Attorney’s Office, according to information from DPS.

Port Neches police were called at 7:02 a.m. Tuesday to the 2100 block of Merriman in reference to a suspicious vehicle parked outside of a residence.

When police arrived they found a man who had active warrants.

The man, later identified as Hull, allegedly tried to evade officers in a stolen vehicle and crashed into a patrol, unit. He then exited the vehicle with a handgun, at which time officers fired their weapons, killing Hull, according to police reports from the scene.