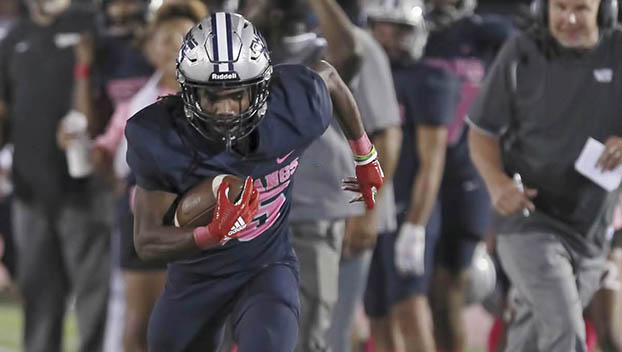 West Orange-Stark’s Jailon Brown heads down the sideline after a big catch against Silsbee last season. Brown will be a key cog for the Mustangs attack this season. (Mark Pachuca/Orange Leader)

The sun rises. The sun sets.

And the West Orange-Stark Mustangs are once again in the Class 4A Division II Dave Campbell’s Top 10 state football poll.

The Mustangs chime in at No. 4 in this year’s preseason poll. All of the polls can be seen in the 2022 Dave Campbell Texas Football Magazine.

“It’s no surprise to us,” said first-year Mustangs head coach Hiwatha Hickman. “Our program has garnered so much respect over the years, and we are always ranked in there, somewhere. Again, it’s just a poll. It all boils down to what you do on the field.”

The Mustangs are on a quest for their 12th straight district title. They are also on a mission to reach the 4A Region III Division II Finals for the 11th time out of the last 12 seasons. Sandwiched in between all of that were four trips to the Class 4A Division II State Championship games (2014-2017) that saw them win back-to-back titles (2015, 2016), as well.

For Mustangs fans, there are plenty of the usual teams that they are associated within the poll.

“That poll hasn’t shifted too much over recent years; it always seems to be the usual teams and that says a lot about all of those programs,” Hickman said. “I know Wichita Falls Hirschi moved down to 4A Division II after reaching the State Semifinals in 4A Division I last year. Gilmer, Cuero, Pleasant Grove, Carthage, Wimberley, we’ve seen some epic battles against those schools for sure.”

Also, as usual, the Mustangs coaching staff continues to low-key such things as preseason rankings.

“Most of the coaches have not even seen or talked about the poll, and far as the kids go, it doesn’t even turn their needle,” Hickman said. “The kids, they know the drill around here. They have always understood it is all about phases. They know they have to get after it in the summer, concentrate week-by-week on our two scrimmages and then get through a tough non-district schedule before diving into what I think might be the toughest district in the state.”

With Silsbee sitting at No. 9 in the state poll and Jasper entering their district, Hickman feels the Mustangs have to prepare week by week.

“Our district is really going to be stronger from top to bottom compared to last year,” Hickman said. “With Silsbee, Jasper and us all in the same region, don’t be surprised to see us have to play one another more than once.”

“We have a lot of key kids coming back but don’t let that 15 number fool you, because several of those guys played on both sides of the ball,” Hickman said. “I think we’ll have much more depth this year, especially with our big guys. We’ve got some young kids that are stepping in, especially on the offensive line, that we are depending on. Hopefully that will mean we won’t have to two-platoon guys as much.”