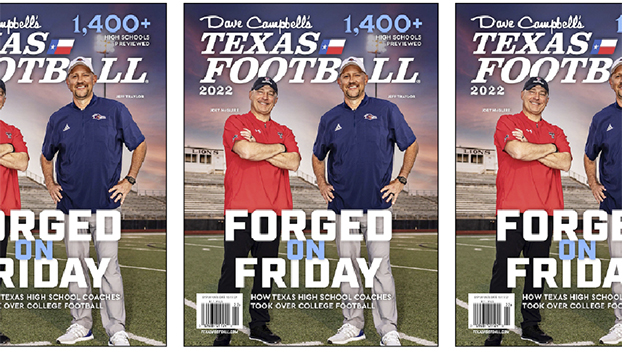 The Dave Campbell Texas Football Magazine is on newsstands.

I will certainly delve into the predictions of the respective high school state and district races along with the colleges, but this space today is “reserved” to talk about what many folks across this great state refer to as “The Texas Bible” of football.

Arguably, Texas is the most football-frenzied state in the country, and, arguably, has the most talent. Texas Football has always had every step covered along the way, not only with its preseason previews but throughout the season, as well.

For a sports-obsessed kid, I remember getting that fresh, new edition of Texas Football every summer as my Mom and Dad would take me to the Orange K-Mart and grab a copy hot off the press.

Can you even conceive of Texas football without Texas Football?

Every 12 months, it’s an encyclopedia of every team in the state, at every level.

The annual summer print edition ran 400 pages this year, and Texas Football’s talented and energetic writers have given it a vibrant online presence, as well.

In Texas Football’s heyday, I was mesmerized by its photography, tight sideline shots of individual players, tape across a busted nose, exhorting teammates on the field.

One of the magazine’s strong suits was that it offered readers something no one else could: in-depth insight from the hometown college writers who actually covered the teams on a day-in, day-out basis.

That remained the case, even as online competition grew and fans gravitated to message boards.

The college previews are just part of the attraction, of course.

The summer magazine has given thorough treatment to the pro teams and, central to its appeal and popularity, annually provides short summaries of every high school team in Texas.

Seeing your own name or the names of kids you know in Dave Campbell’s Texas Football has been a source of pride and excitement for generations.

That pull remains as strong now as all those years ago.

It’s a testament to the impact Dave made on me and thousands of others — players, coaches, fans, PA announcers, media in this state — for more than half a century and counting.

It’s about the sounds of marching bands, cheerleaders yelling out or drill teams dancing to the oldies.

We’re all going to find out which teams move on to the postseason in November; let’s all hope we get everybody in.

I can’t wait and look forward to another memorable football season.

Best of luck to all of our local kids making the tackles and touchdowns, blowing horns and dancing and yelling between the hash marks all season long.