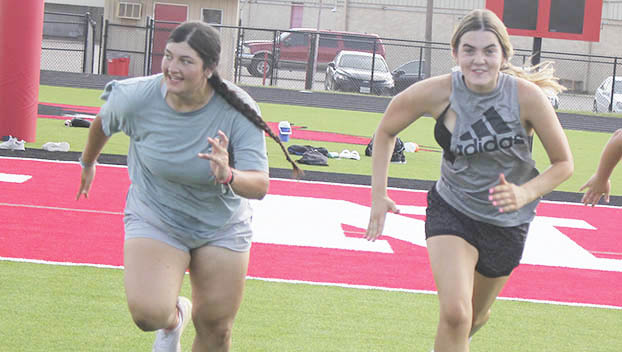 BRIDGE CITY — While the boys have had a nice turnout at the Bridge City Summer Performance Camp at Bridge City High School, so have the girls.

It’s certainly been a hot summer, and the girls are utilizing the facilities to their advantage to keep in tip-top shape.

Many have already built up stamina for their respective upcoming sports seasons.

Volleyball coach Savanah DeLuna is usually one of the coaches pushing the girls to the limit on these balmy weekday mornings.

“We’ve had a good group show up out here every single day of the summer, and they are all so eager to stay in shape and improve their strength,” DeLuna said. “We have a strong workout schedule for them each and every day, and we switch it every other day to work on different areas.”

The schedule is pretty straight forward.

“On Mondays and Wednesdays we get them out here and do a lot of running around the track to build stamina,” DeLuna said. “On Tuesdays and Thursdays, it’s all about building up their speed and agility with a lot of cool drills that they really seem to like. Of course, we try to get in a little weight training every day, as well.”

Incoming sophomore Brooklyn Droddy has been one of the busy ones this summer.

She is coming off a superb freshman campaign on the undefeated District 22-4A champion Lady Cardinals softball team that advanced to the Class 4A Region III Semifinals.

“I love this summer program,” Droddy said. “There are so many of us out here that want to get better, to be in better shape. It doesn’t matter what sport you play, the workouts can benefit and really improve what you are trying to accomplish.”

Droddy likes the number of girls who are meeting the challenges.

“We really come out here and have fun with it,” said Droddy. “We all push each other hard. There are a lot of middle school girls out here, too, which is just awesome. I will say, that first week was so tough and hard. It got better and better each week. Once you get past that part, everything starts kicking in and you realize how hard you can really push yourself.”

Droddy was a key cog in the Lady Cardinals’ run to the 22-4A campaign and claimed All-Orange Leader Team honors.

Bridge City was a perfect 12-0 in district competition.

The Lady Cardinals pushed the Liberty Lady Panthers — who went on to win their second straight Class 4A state title — to the brink in the Regional Semifinals. They fell 2-1 in a gut-wrenching Game Three in which the Lady Cardinals were just a couple outs away from advancing.

Droddy had some key hits in the series, including driving in a couple big runs during the Lady Cardinals’ 4-0 Game One win over Liberty.

“We had a good season, to go 12-0 in our tough district made us feel like we were on top of the world,” Droddy said. “We had a good run in the playoffs, for sure. We beat the defending state champions in one game and we were so close to knocking them out. We were sad to lose but looking at it now, it has really given us confidence going into next year.”

One thing for sure, the Lady Cardinals athletic program had a huge 2021-22, winning district championships in volleyball, track and softball.

“We did have quite a bit of success and we definitely want to build on that going into the next seasons,” DeLuna said. “The kids have been out here all summer, soaking everything in and really getting after it. They are eager and striving hard to get in better shape. They are starting to realize that it is only going to help them improve across the board. We’re all excited about what the program can accomplish.”