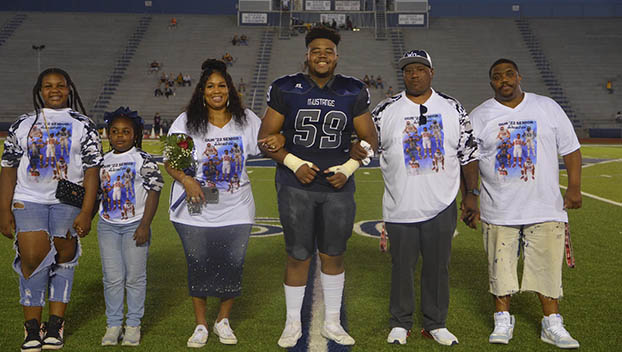 Former WO-S standout Demetrius Hunter, Jr., who will play for the University of Houston this fall, recently made the NFF Team of Distinction Team. Here he is shown with his family on Senior Night last season. (Courtesy Photo)

Former West Orange-Stark standout lineman Demetrius Hunter Jr., who will hone his talents with the University of Houston as a freshman this fall, made an elite team this past week.

Hunter was honored as one of the 82 stellar high school scholar-athletes from across the country who were on the National Football Foundation 2022 NFF Team of Distinction.

Hunter got it done on the field and off the field.

Hunter, a team captain when he played in the Under Armour All-American Game, carried a superb 4.3 grade-point average and was also a member of the Superintendent and Principal’s Honor Roll and made the University Interscholastic Academic All-State Team.

Criteria to make the team included but was not limited to academic achievement, athletic accolades and community involvement. Each chapter is limited to one honoree, distinguishing them as the top scholar-athlete from all the high schools covered by the chapter.

The members of the team all played their final high school football season during the 2021-22 school year. As part of the award, all of the honorees will be part of a permanent digital display at the Chick-fil-A College Football Hall of Fame in Atlanta.

“This initiative allows us to shine a national spotlight on some of the most deserving high school student-athletes honored at the local level by our expansive Chapter Network,” said NFF Chairman Archie Manning.

“This honor is one of the most prestigious national awards that a high school player can receive. We would like to congratulate all 82 honorees for their success on and off the field, especially with the challenges caused by the pandemic during their senior years.”

Since 1954, the NFF Chapters have played an integral role in supporting and promoting the game of football at the amateur level while honoring top scholar-athletes in their local areas. With more than 12,000 members, the nationwide NFF Chapter Network impacts more than 500,000 student-athletes at 5,000 high schools across the country each year.