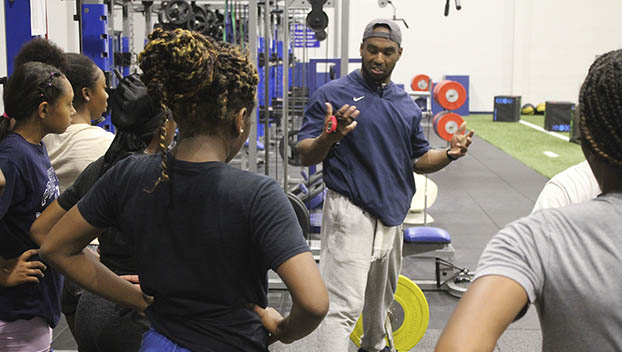 That’s certainly been the mentality of Cory Bell for a lot of years now.

Now he has returned to Mustang Country to make future Mustangs stronger with their muscles and their minds.

Bell was a formidable defender for the Mustangs for a couple years back in 2006-07. He was a Willie Ray Smith Defensive Award Finalist his senior year. He was First Team All-District and the Orange Leader’s Football Player of the Year. He played alongside former Mustangs greats like one of his best friends in life, DePauldrick Garrett, as well as Earl Thomas, Deon Beasley and Ortavious Hypolite.

Now, he’s ready to develop a tremendous group of athletes to be the best they can be on an off the field.

“It’s so great to be back here,” Bell said. “I came here from California in 2006 and was a kid that didn’t know much about Orange, but I grew to love it. Coach (Dan) Hooks and Coach (Cornel) Thompson welcomed me in as part of the family. Coach Hooks, he was a father figure-type and was a hero to so many. Coach Thompson, I like to call him a ‘mauler.’ Man, he got after us good every single day. We called it ‘tough love.’ He taught me so much. I’m so grateful to have played for those two great men.”

It was definitely a journey for Cory to get back to Orange.

He earned his degree from Ohio State University and things kind of took off from there while he was snagged his education.

“I was in school up there at Ohio State and I worked in the school recreational center,” Bell said. “Some folks in the football program noticed me and wanted to know if I would like to be an intern or assistant in their strength & conditioning program, and I was like, ‘heck yes.’”

“You talk about some physical and strong players, those were the Buckeyes,” said Bell. “I was kind of a ‘Get Back Coach’ on the sidelines, making sure they stayed on the sidelines and making sure nothing broke out. It’s funny when you think about it, me telling some guys that could be making millions a year in a couple years, to ‘get back.’”

After Ohio State, Bell moved on to Boston College and worked there for a time.

He then got a call from the staff in Roswell, New Mexico, wanting him to be a strength & conditioning coach for the New Mexico Military Institute Junior College.

Bell exceled in pushing the Broncos to new heights in the weight room and on the field.

“I see a lot of players and coaches walking around West Orange with rings, well I got me one too, now,” laughed Bell. “It was a great journey that we had. It was awesome and all, but I realized that I was ready for another journey.”

Bell came back home in the early part of the spring to be at Coach Thompson’s retirement celebration. While there, great memories came back and he had some backing, as well.

“DePauldrick Garrett (Mustangs running backs coach), one of the most dearest teammates I ever had, grabbed me and told me that I needed to come back,” Bell recalls. “He put a ‘bug’ in some ears, introduced me to Coach Hickman. Coach Hickman is so awesome and helped create the job for me. Everyone has welcomed me with open arms.”

Nowadays, you can find Bell belting out positive messages as the Mustangs and Lady Mustangs go at it every morning this summer at the Thompson Strength & Conditioning Center.

“I’m super proud of the turnouts we’ve had throughout the summer,” Bell said. “If old Mustangs walked through here, they would see we are doing things a little different, but not to an extreme. We get in a lot of reps in everything that we do. There is more movement, not staying at the same stations for a long period of time anymore. That is happening a lot across the country, and we’re implementing that here. The Mustangs, we’re working just as hard as we ever have, I promise. The mentality around here is not going to change. Let’s just call it a new-school approach with an old-school mentality. We’re not going to forget where we came from.”

Bell also makes sure all the athletes receive positive messages throughout each workout session.

“I still consider myself young in a lot of ways and I have seen some crazy stuff in this world,” Bell said. “I tell them every day that they have to be solid citizens, be respectful of others, go to class, do you work. Diminish their times on social media and be with your friends more, like we did when I was their age. A lot of kids this day-and-age are given things on a silver platter. It can be a cruel world out there, and I just want them to find their inner selves and know we can all be solid people when we work at it. I like to help the kids find their mental health just as much as their physical health.”

Bell has certainly been impressed with the work ethic the Lady Mustang athletes have shown early on this summer. The WO-S girls tended to have small numbers when it came to the summer program over the last several years.

“They are coming out here and getting after it,” said Bell. “The numbers were small to begin with, but the group has grown a whole lot here in late June. They realize they just can’t go on the courts, fields and track and expect to win because they show up.”

Bell would love to see more W’s come their way when the various Lady Mustangs seasons crank up.

“I tell them all the time, ‘If you are tired of seeing LC-M, Bridge City and Orangefield girls in the headlines all the time, then do something about it,’” Bell said. “That’s just the competitive nature in me coming out. You got to remember, I came through here when Brittany James and Brittney Scott played ball. Man, that was something special, two of the best female athletes I ever seen at that level, bar none.”

Bell and his wife Ana have settled in nicely back in the Orange area. They also have a beautiful daughter named Analise, who turns 1 on July 1.

“Those two are my pride and joy, they are my rocks and I’m so blessed,” said Bell.

Bell is feeling extremely giddy about Aug. 26. That’s when the Mustangs welcome in Nederland for the first official game of the 2022 season.

“We count down the days to that date and we’re fixing to be under 60 days here pretty soon,” Bell said. “I can’t wait and sure wish I could suit out one more time in that Blue & Silver. Who knows, they might have to get a ‘Get Back Coach’ for me, just so I don’t run through that WO-S helmet tunnel when we hit the field. It’s just great to be back and be an integral part of the most winningest program in the history of the state.”