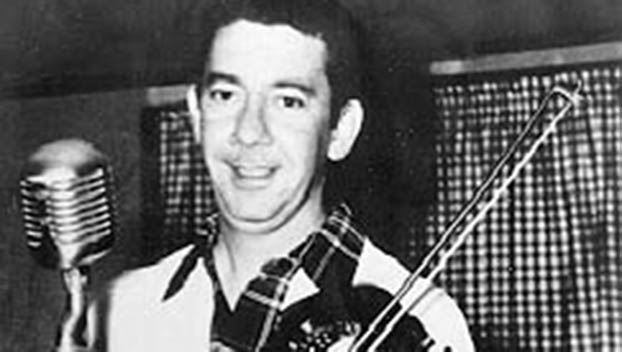 It reached No. 5 and after dropping, it returned to No. 5 six months later.

In 2014 Rolling Stone Magazine rated Jole Blon at 99 on its list of the top 100 country songs of all time. The song was a moneymaker, but not for Harry Choates.

He had sold the song for $100 and a bottle of whiskey. Neither he nor Quinn had bothered to copyright the song and as a result, neither ever received any royalties.

Business did not matter to Choates, he only wanted to play his music and drink any kind of alcohol, as much as he could afford at the time.

On July 11, 1945, Choates married Helen Daenen. He met her while he was living at the Sikes Hotel in Orange and playing “Across the River” at the Show Boat nightclub.

The Show Boat was a former riverboat, the Harry Lee, that had been moored across the Sabine River from Orange on Highway 90.

Daenen fell in love with Choates because of his stage presence and his personality. He was always an upbeat fun loving person. Often, he was so drunk he could hardly stand up, but no one seemed to notice.

Daenen knew about the drinking but thought that she could live with it. They had two children, a boy Edison, and a girl, Linda. Even though he loved his family, they were third behind his drinking and music.

Eventually they would divorce and his not paying court-ordered child support of $20 per week would be the cause of him being jailed in Austin and dying there.

Choates knew no boundaries when needing money for whiskey. Once in Lake Charles, he busted out a window with his elbow, reached in and grabbed a bottle of whiskey. One time he sold a fiddle for $1 to buy a half pint of whiskey and once he sold the starter off of the car he borrowed from a friend because he needed a drink and was broke.

By the end of his life, he would drink lighter fluid, after shave lotion or any kind of liniment, as long as it had alcohol in it. His cause of death is officially listed as kidney and liver failure due to chronic alcoholism.

Choates was once booked to play at a club in the Hill Country of Texas. The booking agent did not know Choates and was not familiar with his music. He had booked Choates because Jole Blon was on the charts.

When Choates got to the town and saw the promotional material had billed him as “Harry Shoat and the Jolly Blow Boys,” his anger flashed, and he went searching for the agent to “beat him up.”

He did find the agent and did proceed to beat him. Fortunately, his friends were able to keep him out of jail and pay only a small fine for battery. When he was drinking too much, his temper was uncontrollable.

Once when Choates was playing in Austin, Earnest Tubb was also playing there and went to hear Choates. Tubb was so taken with Choates and his ability to play different instruments in different styles, as well as his singing and showmanship that he offered to take Choates to Nashville and introduce him to people that would record him on a major label.

Choates refused. His reason was “I do not want to go that far from home.”

Choates spent his career playing venues in Texas and Louisiana. To the best of anyone’s knowledge, he never played north of Little Rock, Arkansas.

When they learned Choates had died, his friends in the Jesse James Band held a fundraiser to buy his casket. In his hometown, Port Arthur, disk jockey Gordon Baxter announced his death and asked people to come by the station and make a donation for his funeral expenses, “even a dollar will help,” said Baxter.

More than $1,000 was raised, enough to cover all the expenses.

He was buried in Calvary Cemetery in Port Arthur. His grave was marked with a white marble stone obtained through his service as a U.S. Army veteran.

In 1980, funds were provided by Tim Knight and Roy Dunn to erect a gray granite stone giving him credit for being “The Godfather of Cajun Music”— (“Parrain De La Musique Cajun”).

In 2007 a Texas State Historical Marker was erected at his grave through the efforts of Jerry Bellot, Jeff Hayes, Tim Knight, Huey P. Meaux and Sam Monroe.