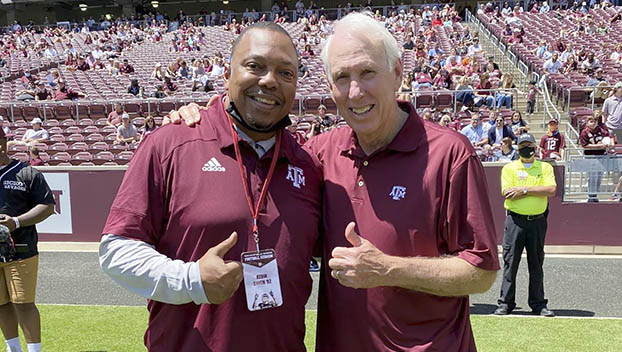 Former West Orange-Stark football standout Kevin Smith always brought his “A Game,” whether it was for the Mustangs, Texas A&M Aggies or Dallas Cowboys.

Smith, a former Texas A&M All-American cornerback, was one of those nominated for his stellar career as one of the better defenders in Aggies history.

Smith broke onto the scene in Aggieland as a freshman in 1988, when he played for fellow Orange native and A&M coaching legend R.C. Slocum, intercepting two passes and breaking up five others. The following season, Smith had one of the greatest individual seasons an Aggies player has ever had in the secondary. He totaled 36 tackles (27 of them solos) to go with one forced fumble, nine interceptions and ten passes broken up. He clinched a season-opening win over LSU, the Aggies first over the Tigers since 1975, with a late game interception-return for a touchdown, 28-17.

Despite the fact that Smith’s reputation should have preceded him, he had another seven interceptions in 1990 as a junior (returning two of them for touchdowns) and broke up eight passes.

In his final campaign, he became a 1991 consensus First Team All-American and leader of an Aggies unit that led the nation in total defense (222.4 yards per game). In the process, the three-time First Team All-Southwest Conference performer helped the Aggies to the 1991 conference title. In addition, Smith was moved to punt returner midway through his senior campaign and returned two kicks for touchdowns.

He is A&M’s all-time career leader in interceptions (20), interception return yards (289) and interceptions returned for a touchdown (3). After his A&M career, he was selected in the first round of the 1992 National Football League draft by the Dallas Cowboys and won three Super Bowls with the franchise in the 1990s.

The criteria for Hall of Fame consideration include:

• First and foremost, a player must have received First-Team All-America recognition by a selector that is recognized by the NCAA and utilized to comprise its consensus All-America teams.

• A player becomes eligible for consideration by the Foundation’s Honors Courts 10 full seasons after his final year of intercollegiate football played.

• While each nominee’s football achievements in college are of prime consideration, his post-football record as a citizen is also weighed. He must have proven himself worthy as a citizen, carrying the ideals of football forward into his relations with his community. Consideration may also be given for academic honors and whether the candidate earned a college degree.

• Players must have played their last year of intercollegiate football within the last 50 years.* For example, to be eligible for the 2023 ballot, the player must have played his last year in 1973 or thereafter. In addition, players who are playing professionally and coaches who are coaching on the professional level are not eligible until after they retire.

• A coach becomes eligible three full seasons after retirement or immediately following retirement provided he is at least 70 years of age. Active coaches become eligible at 75 years of age. He must have been a head football coach for a minimum of 10 years and coached at least 100 games with a .600 winning percentage.