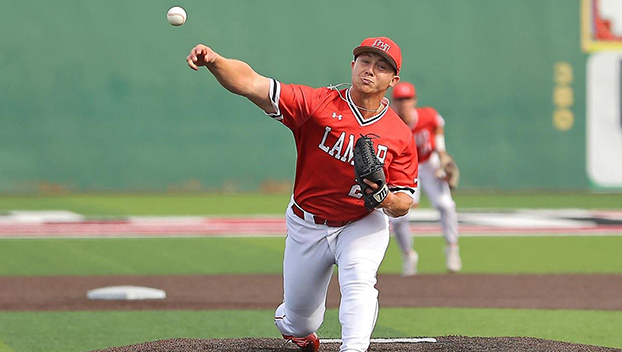 Dallas and Wheaton helped lead the Cardinals to their best record since 2013 – a year that saw the Cardinals win 37 games and advance to the winners bracket of the WAC Baseball Championships.

A five-year letterwinner, Dallas has been a mainstay of the Cardinals’ program for the past five seasons. The Orange native took over the closer role for the Cardinals prior to the 2021 season and never looked back, setting the LU single-season record as a junior. Dallas only added to those honors in 2022 setting a new single-season saves record while becoming the school’s all-time leader in saves and appearances.

Dallas finished the year with a 4-1 (.800) record with a 1.94 earned run average and a 1.20 WHIP, while leading the Western Athletic Conference with 14 saves. He struck out 55 batters (to just 14 walks) in 41.2 innings pitched. Dallas closed the season by earning first-team All-WAC honors.

While Dallas was a five-year letterwinner for the Red and White, Wheaton took a different route to the Golden Triangle, arriving via transfer for his senior season. A second-team All-WAC selection, Wheaton took over the Cardinals’ Saturday starting role and went on to lead the conference in wins (10) and ERA (2.79), with a 1.25 WHIP.

Wheaton also struck out 66 batters in 84 innings pitched. Wheaton also posted three starts where he didn’t allow an earned run and two others where he only allowed one run to score.