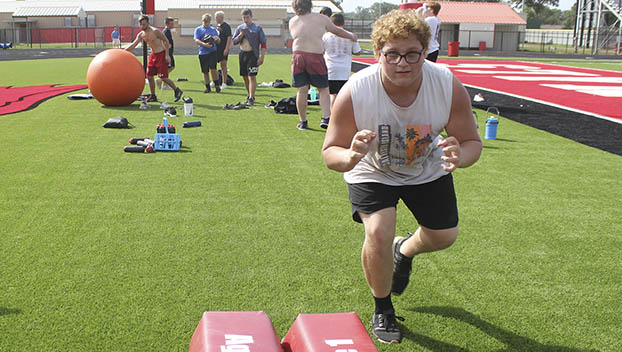 BRIDGE CITY – As a sophomore, he turned plenty of heads by making the All-District team at defensive tackle.

Going into the 2022 season as a junior, Bridge City’s Nick Lejeune is ready to up the ante for Head Coach Cody McGuire and the Cardinals.

“Last year was awesome for me because not a lot of people expect a season like that from a sophomore,” Lejeune said. “It was good to know that they had confidence in me to go out there and get the job done. This year I would love to pay them back by making All-State.”

Lejeune and his fellow Cardinals have been going at it hard throughout the summer, beating the heat with plenty of early morning summer sessions.

“We’ve had a lot of people show up all summer long, and that’s a good thing,” Lejeune said. “Everyone out here has been ready to work. We have a pretty good routine down. The heat, you kinda get adjusted to it pretty quick. We just make sure we stay hydrated.”

“We are usually in the weight room an hour each morning, sometimes two for those that like to stay a little afterwards,” Lejeune said. “We also do a lot of stamina drills by running a lot, too. We go through a lot of agility drills and we also get to spend some time with our specific units when we divide up the linemen and skill people.”

The morning workouts also aid Lejeune quite a bit.

“The schedule works great for me, work out in the mornings, go home, hydrate and rest, and then I go to work at Dairy Queen in the evenings,” he said.

Lejeune was proud to be a part of a much-improved Cardinals unit last season. After winning just one game in 2020, Bridge City quadrupled that number to four last season.

“We really improved quite a bit,” said Lejeune. “We didn’t know what to expect, but Coach McGuire came in and changed our mindset. I think that gave us more energy. We started to work much harder then before, and the athleticism in us came out more. He’s a great coach and he’s willing to help you in anything.”

Lejeune had plenty of shining moments last year with a few really sticking out.

“We beat Tarkington like 48-0 and we pushed everyone in not letting them score a point,” he said. “We accomplished that and it gave us confidence. The district wins over Liberty and Hardin-Jefferson were exciting, too, because we made some big stops late in those games to win.”

“He’s a big old ox that is so darn strong,” expressed Hallman. “He’s the guy that anchors that defensive line big-time, and he did it as a sophomore.”

Hallman expects the junior-to-be to lead some of the younger players.

“He’s so coachable and likeable and the younger kids see that, he’s just a great kid,” Hallman said. “He’s different when he hits the field on game nights. He’s one of those guys that when he gets his paws on you, you don’t get away.”

“It’s really great to see all of these younger kids out here, there are so many middle school players out here, too,” Lejeune said. “I’m here to help show them what it is all about. There is a big difference playing on Friday nights, though, I learned that quick last year. It’s a whole different type of deal, where everything moves faster and you have to be ready for it.”